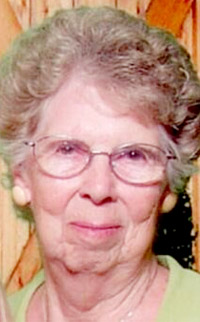 Verna I. Leuze, 98, of Watertown passed away peacefully Sunday afternoon, September 16, 2018, at Hospice of Jefferson County.

Calling hours will be held at Cummings Funeral Service, Inc., Watertown on Wednesday, September 19, from 4 - 7PM. The funeral service will be at the funeral home on Thursday, September 20, at 10:30AM with Rev. Gail Parsons presiding followed by burial in Lakeside Cemetery, Sackets Harbor.

Verna was born in Watertown on May 31, 1920, daughter of Ford and Lanah (Knight) Percy. She attended both Holy Family and St. Patrick's Elementary Schools and was a 1938 graduate of Immaculate Heart Academy. On May 16, 1939 she married Richard J. Fisher in LaFargeville and the marriage ended in divorce. She married John E. Leuze on May 3, 1951 in Ocala, FL and Mr. Leuze died December 3, 1982.

She was the head bookkeeper for Smith's Meat and Poultry Market, Watertown for a time. She then began her 36 years of service to Calavo Growers of California, Sackets Harbor, first as an office worker and retired as supervisor. While working for Calavo's, Verna was part owner with her sister, Erma, of the Harbor Light Restaurant at Bronson's Marina and also worked at Bachner's Sackets Inn.

In lieu of flowers, her family wishes donations in her name to either Upstate NY Multiple Sclerosis Society, 1000 Elmwood Ave., Suite 900, Rochester, NY 14620 or Hospice of Jefferson County, 1398 Gotham St., Watertown, NY 13601. Online condolences to her family may be posted at www.cummingsfuneral.com.