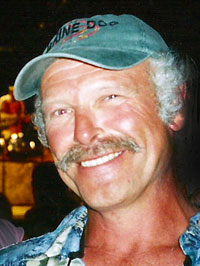 Captain Walter Bruce Boname, 56, of Cape Vincent, died while adventuring on the island of Eleuthera, Bahamas on February 3, 2013.

A man who was surrounded by life, he spent each day living for the world around him. He was happiest out in the woods, out on the boat, or with his family. The wind set his sails towards his goals, and his love for the environment set his standards. He was a truly unique individual full of life. Walter resided on the St. Lawrence River where he was the definition of a true river rat. One of his greatest joys was the hours spent gardening at home; with a garden of the highest caliber, his green thumb will never be forgotten.

Walter was brought into this world, a leap year baby, by his grandfather, Dr. Mat G. Boname, in 1956 in Norwich, NY. He graduated from Oxford Academy in Oxford, NY and attended South Hampton University on Long Island.

He married Audrey L. Block on September 10, 1989 at their home on the St. Lawrence River.

A New York State Licensed Hunting and Fishing guide for 25 years, Walter was an environmental conservationist and enthusiast. His secondary home was the island of Eleuthera, where he was respected and loved as a fisherman and free diver. He was a member of the NYS Guide's Association.

Walter will be loved and remembered for his adventurous being, compassion, inspiring wisdom, knack at catching a fish even on the worst of days, his navigation skills as a sailor bringing him to many harbors across the eastern seaboard, for loving his family and others unconditionally, and for giving the best hugs in the entire world. Walter’s philosophy was to “Fill your days with life, not your life with days.” He will be greatly missed by many.

Calling hours will be held on Thursday, February 14, from 4 - 7PM at Cummings Funeral Service, Inc., Clayton. The funeral service will be on Friday, February 15, at 11AM at River Community Church, Clayton.

In lieu of flowers the family would like to continue Walter's legacy by having contributions made to ‘Kids to Camp Fund’ a New York State Summer Environmental Education Camp. Donations can be sent to: NYSOGA, Craig Tryon, 2365 Olanco Road, Marietta, NY, 13110. Online condolences to the fmaily may be made at www.cummingsfuneral.com.