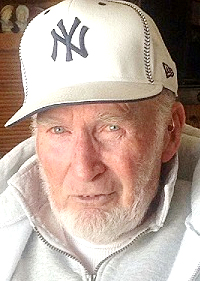 Leo "Pop" Ingerson, 93, passed away at his home on Mutton Lane, Clayton on Sunday morning, September 2, 2018, surrounded by his family.

At his request there will be no calling hours or funeral service. Burial in St. Lawrence Cemetery will be at the convenience of his family. Arrangements are entrusted with Cummings Funeral Service, Inc., Clayton.

Leo was born in Clayton on July 3, 1925, son of Stanley M. and Elwina M. Pelow Ingerson and he attended Clayton schools. On June 29, 1943 he entered the US Navy. He served on four different ships as a gunner and during his service to his country, he received the American Theatre, European, Asiatic Pacific, and Victory Medals. He was honorably discharged as a Seaman First Class on March 24, 1946.

After his service in the Navy, Pop worked with his father, Stan, and his brother, Gerald, and was a welder at Frinks SnoPlow, working nights. He then started his own business, Leo Ingerson Contracting. He worked full time at his contracting business until 1988, but never really retired fully. Leo was a 74 year member of American Legion Colon Post 821. Pop was very much loved by his family and he enjoyed hunting, fishing, and gardening and was an avid NY Yankees fan. His interest in fishing was written up in 1995 in Outdoor Life Magazine and in 2002 in New York Game and Fish Magazine.

In lieu of flowers, Pop's family would like contributions in his name to the Clayton Food Pantry, c/o St. Mary's Church, 521 James St., Clayton, NY 13624. Online condolences to his family may be posted at www.cummingsfuneral.com.