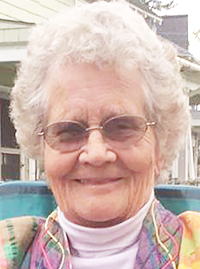 Beverly H. Donohue, 88, of Academy Street, a registered nurse and widow of Paul Francis Donohue, passed away on Friday afternoon, August 17, 2018, in her home under the care of her family, caregivers, and Hospice.

Born on May 22, 1930, she was the second of three children born to Isabel LaPier Hodge and Gordon Hodge.

After being named valedictorian of her 1947 Watertown High School class, Beverly entered the House of Good Samaritan nurses' training program. On August 14, 1950 she eloped and married Paul F. Donohue in Carthage, NY, keeping it a secret because nursing training, at that time, prohibited marriage. Beverly graduated from the House of Good Samaritan nursing program in 1951 and worked at the hospital until 1958 when she quit to stay home with her children.

She was active in the altar guild for 60 years, first at St Paul's Episcopal Church and later at Holy Family Church, where she was also a member of its Celebration Singers. With her husband Paul, she was a presenter at weekend seminars for World Wide Marriage Encounter, the world's largest pro-marriage organization, from 1973 to 1980. Beverly also played bridge in a bridge club, quilted with the North Country Quilt Guild, served as an enthusiastic election poll worker, and attended the Watertown Home Bureau.

Calling Hours will be held at Cummings Funeral Service, Inc. on Friday, August 24, from 6:30 to 8:00pm. The funeral service will be at the funeral home on Saturday, August 25, at 10:00am with Fr. Steven Murray officiating, followed by burial in Glenwood Cemetery. Donations may be made to Hospice of Jefferson County 1398 Gotham Street Watertown, New York 13501. Online condolences to her family may be posted at www.cummingsfuneral.com.