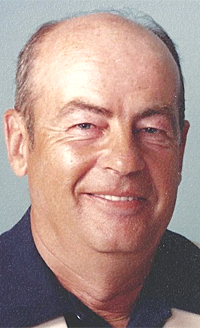 Jim graduated from the Clayton Central School in 1941. He attended Clarkson University leaving to enlist in the U.S. Navy during WWII. After the war he graduated from Cornell University. Jim received his commission as an Ensign from the Northwestern University Midshipman School in Chicago, IL in 1944 and was married the same day to his high school sweetheart, Helen Leavery.

He attended the Tactical Radar School in Hollywood, FL and was assigned to duty aboard USS Woodford AKA 86. His ship proceeded to the Pacific. Leaving Pearl Harbor his ship was at the Marianas, the Philippines and took part in the Battle of Okinawa.

After WWII Jim joined the Naval Reserves and in 1950 he was recalled to active duty for the Korean War. He served aboard the USS Calvert APA 32 and the USS Rankin AKA 103 both in Korean waters. He returned to the reserves after the war and later became the Commanding Officer of the Watertown Naval Reserve Division 3-102. He retired from the Navy after 26 years of service with the rank of Commander.

In 1954 Jim became the third generation to own and operate Hungerford Hardware in Clayton, NY. This business was founded by his grandfather in 1888. Jim retired in 1975 when his son, Peter, purchased the business.

His interests in life were family, hunting, fishing, boating and golf. Later in life he and his wife, Helen, enjoyed travel with many trips worldwide.

Jim was predeceased by his beloved wife, Helen, in 2013 and a brother Stanley. He is survived by his sons and their wives: James (Sylvia), David (Lynda), Peter (Karen) and a sister Lois Jean MacFarlane, six grandchildren, seven great grandchildren and others.

His funeral service will be held at Christ Episcopal Church on Saturday September 1, 2018 at 11:00 am with The Rev. Lisa J. Busby, rector, presiding. Burial with military honors will be in Clayton Cemetery. There are no calling hours and arrangements are entrusted with Cummings Funeral Service, Inc., Clayton.

In lieu of flowers, Jim's family requests donations in his name to Hospice of Jefferson County, 1398 Gotham St., Watertown, NY 13601 or the American Cancer Society, P.O. Box 7 East Syracuse, New York 13057. Online condolences to his family may be posted at www.cummingsfuneral.com.

12
#15 Jay Cunningham 2018-09-23 09:41
I've enjoyed reading the comments about Uncle Jim!
Summer's in Clayton with my mother's side of the family - Hungerfords, Potters, Willcox and Willseys - will remain with me forever. We always looked forward to our trips there! Early this year I called Jim to fill him in on the news in our family. He sounded good. He had a full life and a wonderful loving family!
Report to administrator
#14 Jodie W Heimgartner 2018-09-21 13:10
Jim, David and Peter,

The picture of Uncle Jim is exactly as I remember him – handsome, confident, cool, fun loving and with a twinkle in his eye. Our 1000 Island summers with the Hungerfords were so special and memorable. They were times for just being a kid in a vacation paradise surrounded by family, nature, countless games and activities, laughter, friendship and love. Of course, this was only made possible by the generosity of the ultimate hosts, Uncle Jim and Aunt Helen. How blessed you boys were to have them as parents and how lucky we were to be in all of your lives for a couple of weeks each summer.