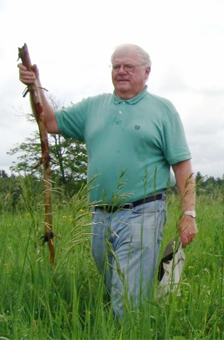 Ken was born in Queens, New York on September 4, 1936. He graduated from Jamaica High School and attended SUNY Farmingdale, the University of Georgia, and the University of Wisconsin, receiving degrees in ornamental horticulture, entomology and plant pathology.

Ken became a teacher of 7th and 8th grade general science at Farmingdale Public Schools in 1962. He was an ardent trade unionist who was elected president of his union, the Farmingdale Federation of Teachers, for thirteen successive terms. In the '60s and the early '70s, Ken was president and chief negotiator for his local. He fought the battles for equal wages and working conditions for women, for equal access to female student intra-mural sports activities, for humane maternity leave policies and of course, for lower class size, higher pay and better working conditions for the teachers in his local. In 1967 Ken helped to negotiate one of the first public school labor contracts in New York State.

Ken served on the Executive Committee of the state union both before and after the merger. He also was for many years Vice President for Long Island of the American Federation of Teachers, the national teachers union.

After serving for many years on the union's executive committee, Ken successfully ran for the full-time position of First Vice President of NYSUT. During his 9 years as first vice president, he created the NYSUT Member Benefits Trust, the organizational structure for retired teachers, the NYSUT Legal Services Plan and shepherded the entire member benefits program for the Union all the while remaining a statewide leader.

In 1985, he resigned from his union positions and took employment as University Director of Employee Benefits for The City University of New York (CUNY). In this position, he was responsible for the stewardship of the university's pension plans, health insurance programs, deferred compensation plans, etc. for its eighteen colleges. During this time, Ken represented the university by serving as treasurer of the International Life Science Institute in Washington DC.

Ken retired in 1993, re-tooled and became a Certified Residential Real Estate Appraiser. He was a part-time appraiser for the next decade or so.

The love of Ken's life was the St. Lawrence River and its Islands. He first came to the river with his parents who were ardent fishermen in 1950. For the next 68 years, Ken spent either vacations or the entire summer on the river he loved. He and his late brother, Matt, purchased land on Grindstone Island in 1964 from Bernard Heineman who, at the time, owned most of the foot of Grindstone. In 1969 he built his camp and was fortunate enough to spend most of every summer thereafter on Grindstone.

Although he had several successful careers and accomplished much, Ken was most proud of his role in the founding in 1985 of the Thousand Islands Land Trust (TILT) along with several neighbors and friends from Grindstone Island. As its first president, an office that he held for thirteen years, he helped to guide TILT from a Grindstone Island conservation organization that held two conservation easements to what is now a River-wide organization that stewards close to 10,000 acres of land in the St. Lawrence River Valley. Ken remained on the TILT board for 33 years and still served at the time of his death.

In addition to serving on the TILT board for 33 years, he was a board member of Save The River! for 15 years and upon his retirement was honored with trustee emeritus status. Another favorite non-profit was the Thousand Islands Arts Center. He served on that board for four years and later continued as a member of several committees until his death.

Ken was an incomparable historian, genealogist and networker. He knew most everything about the Island, the families and the region's history and would generously share his knowledge. More importantly, he made it a point to know everyone who lived on Grindstone as well. He would put people together for their mutual benefit and to help the many charities he supported. But more than that, he had a big heart and was the first to offer help, share his home and do whatever else he could to help a friend. His gifts of homemade jam from Grindstone's bounty were legendary.

In the last weeks of his life, he and his nephew Matt and neighbor and good friend Will Ramseier, worked out details placing conservation easements on their properties. He never gave up on his vision.

Ken is survived by his sister-in-law Barbara, his nephew Matt, his nieces Susan Deedy and Sue Deedy Mahoney, and his beloved grand nephews and nieces, Matthew, Sean, Tommy, Julia and Amanda all of whom will continue to enjoy life on Grindstone into the future.

Ken's family is in great debt to the many friends who cared for him throughout his illness in Florida and New York. He told his family and his extensive group of friends that they made his life bearable the last three months. His family also wishes to thank the many people who assured that his return to the north country by medical jet was swift and comfortable.

Arrangements will be through Cummings Funeral Service, Inc. of Clayton. There will be calling hours from 4 PM to 7 PM on Saturday, September 1, 2018. A celebration of his life will be at the Grindstone Island Methodist Church on Sunday, September 2, at 2 PM. Burial on the island will be at the convenience of the family. In lieu of flowers, memorial contributions may be made to the Thousand Islands Land Trust, 135 John St., Save The River, 409 Riverside Dr., or the Thousand Islands Art Center, 314 John St., all in Clayton, New York 13624. Online condolences and memories to his family may be posted at www.cummingsfuneral.com.