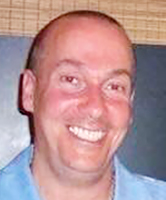 Stanley F. Thomas Jr., 55, of Watertown passed away Wednesday evening, July 18, 2018. Calling hours will be held at Cummings Funeral Service, Inc., Watertown on Monday, July 23, from 4 - 7PM. The funeral service will be at the funeral home on Tuesday, July 24, at 1PM with Pastor Jeff Smith presiding followed by burial in North Watertown Cemetery.

Stan was born in Watertown on February 27, 1963, son of Stanley F. and Nancy (Beach) Thomas and he graduated from Watertown High School. He was a correction officer at the Watertown Correctional Facility and for over 30 years, owned and operated Thomas Painting. He was a member of Elks Lodge 496, Eagles Aerie 782, and American Legion Post 61.

He enjoyed motorcycling, traveling, listening to music and attending concerts, and working out at the Y. Stan also enjoyed sports and was passionate about the Pittsburgh Steelers. Bull dogs were also his passion. He was very sociable, a smile was on your face whenever you were around him, and he was willing to do anything for his family and his friends.

In lieu of flowers, the family wishes donations in his name to the American Cancer Society, P. O. Box 7, E. Syracuse, NY 13057. Online condolences to his family may be posted at www.cummingsfuneral.com.