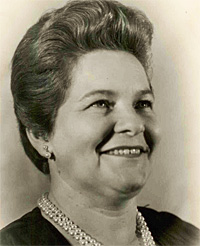 Calling hours will be held at Cummings Funeral Service, Inc., 320 John St., Clayton on Monday, July 9, from 6 - 8PM. The funeral service will be at the funeral home on Tuesday, July 10, at 11AM with Rev. Walter Giles presiding followed by burial in St. Lawrence Cemetery, town of Cape Vincent.

Julia was born in the town of Cape Vincent on July 6, 1931, daughter of William and Gertrude (Fisher) Turcott. She attended Clayton High School, received her GED in Harrisville, and her associates degree in Business Administration from JCC. On July 7, 1967 she married Maurice A. "Dude" Cole in Hallstead, PA and Mr. Cole died March 13, 1992.

She was a waitress in various Clayton restaurants, including McCormick's, was a seamstress at Clayton Manufacturing Co., and an assembler at Faichney's Instruments, Watertown. Most recently, Julia worked as a mortuary clerk on Ft. Drum. She enjoyed sewing and gardening in her spare time.

The family would like to thank Jan Patchen and Donna Vout for their friendship, care, and concern on Julia's behalf. Donations in her name may be made to Alzheimer's Association of CNY, 441 W. Kirkpatrick St., Syracuse, NY 13204. Online condolences to her family may be posted at www.cummingsfuneral.com.