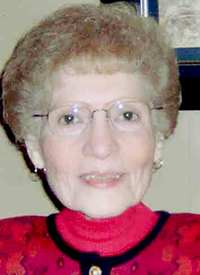 Carmel Leana Breathour, 97, of Watertown passed away Sunday afternoon, July 1, 2018, at Samaritan Summit Village where she had resided for over four years.

Calling hours will be held at Cummings Funeral Service, Inc., Watertown on Saturday, July 7, from 10 - 11:30AM. The funeral mass will follow at St. Patrick's Church at noon with Msgr. Robert Aucoin, pastor, presiding followed by burial in Glenwood Cemetery.

Carmel was born in Carthage on July 21, 1920, daughter of Anthony and Concetta Leana and she was a graduate of Watertown High School. She resided at 123 S. Meadow St. with her mother for many years and worked at NY Telephone Co. until her marriage on January 18, 1964 to Warren D. Breathour. The couple then moved to St. Claire Shores, MI where they lived for 40 years. While in Michigan Carmel was employed by Chase Bank. Having the desire to move back home to the North Country, the couple moved to Watertown in January 2008 and resided at Ives Hill Retirement Community until their illnesses. She was a communicant of St. Patrick's Church. She had no hobbies but enjoyed watching the Cooking Channel, shopping, and getting her hair done.

She is survived by her sister-in-law, Barbara Bradsell, Harrisville, MI and numerous nieces, nephews, and cousins. She was predeceased by her husband, Warren, who passed on December 9, 2017; five brothers, Joseph, Frank, Alfred, and Dominick Leana, and Sammy Leana, who died as an infant, and one sister, Mary Oliverio; three nephews, Anthony "Tony" and Robert "Bob" Oliverio, and Frank Leana; and two nieces, Alice Leana and Mary Greer.

Contributions in Carmel's memory may be made to The Diocese of Ogdensburg Campaign Fund for St. Patrick's Church or to Samaritan Summit Village. Mailed condolences may be sent to the care of one of her nieces, Donna M. Leana, 22500 Eacho Dr., Watertown, NY 13601 and online condolences to Carmel's family may be posted at www.cummingsfuneral.com.