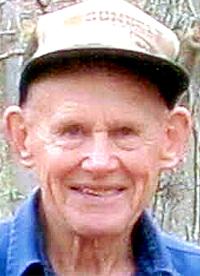 A graveside service will be held in St. Lawrence Cemetery, town of Cape Vincent on Saturday, June 2, at 11AM with Deacon Neil Fuller, of St. Mary's Church, Clayton presiding. There will be no calling hours or funeral service and arrangements are entrusted with Cummings Funeral Service, Inc., Clayton.

Perley was born in Clayton on December 16, 1928, son of Perley and Eleanor Potter Edmonds. He was Valedictorian of the Clayton High School Class of 1946.

On December 18, 1950 he married Doris M. Negus, the love of his life, in the parsonage of the Clayton Methodist Church with Rev. Soloman Card officiating. Mrs. Edmonds died March 9, 2002.

Perley worked in the Clayton area for Frink's SnoPlow, Kraft Foods, and Howard Smith Feed Store. He then began his career at Graphic Controls, retiring in 1991 as a printing press operator. He was an avid outdoorsman, preferring to be outside as much as possible. He was a bird lover, especially ducks and turkeys. People will remember him driving around with his pet turkey, Bean Head, in the front seat, listening to Vivaldi.

Perley is survived by his daughter and her husband, Dawn M. and James M. Paprocki, Clayton, his sister, Bette Brubaker, Clayton, and several nieces, nephews, and cousins. His son, Glen E. Edmonds, died August 21, 1975 and his two brothers, Glenn and Benjamin, also died before him.

In lieu of flowers the family wishes donations in his name to either the American Heart Assoc., c/o Stacy Spaziani, 204 Iroquois Ave. W., Watertown, NY 13601, or the National Audubon Society, 225 Varick St., 7th Floor, NY, NY 10014 . Online condolences to his family may be posted at www.cummingsfuneral.com.