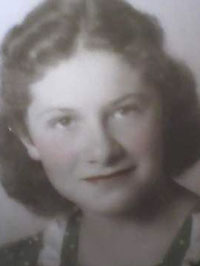 Zeigler, Doreen O. (of Clayton, New York) entered into rest on her birthday, January 19, 2013. Born Doreen Olive Gallinger in Maitland, Ontario, Canada in 1924 to Hazel Watters Gallinger and Walter Matthew Gallinger, her childhood was spent in Brockville , Ontario, Canada. She was predeceased by her husband of 31 years, Maxwell "Mike" Zeigler, with whom she owned and operated the Town and Country Restaurant in Clayton, New York for nearly a decade.

She was also predeceased by her sons, William and Daniel, her grandson, Maxwell "Zach" Zeigler, all of Clayton, and her sister, Margaret Gallinger Nicholson of Ontario.

She leaves three sons, Maxwell, "Joe," Clayton, New York, David, Buffalo, New York, and Steven, Watertown, New York. She was a doting grandmother to 21 and a great-grandmother to five, as well as a loving aunt and great-aunt to the children and grand-children of her sister Margaret.

Doreen and Mike met and married in Washington, D.C. in 1946 while she was a secretary at the Canadian Embassy. Throughout the years they and their growing family resided in Rochester, New York, San Diego, California, Carthage, New York, Kissimmee, Florida, and Clayton, New York.

In the 1980's, Doreen was employed by Disney and worked at the Canadian Pavilion in Epcot in Orlando, Florida.

Doreen was a parishioner and Sunday School teacher at Christ Episcopal Church in Clayton for a number of years. She was an avid reader, especially of Reader's Digest's stories. Her greatest joy was her family and sharing the many events that brought them all together.

Doreen was a loving and compassionate woman who extended a welcome, filled with warm and kindness to everyone she knew and met. She will be greatly missed.

A graveside service will be announced in the spring. Arrangements are with Cummings Funeral Service, Inc., Clayton.

Flowers are gratefully declined and donations may be made to the Alzheimer's Association, Central NY Chapter, 26000 US Rt. 11, #423, Evans Mills, NY 13637. Online condolences to the family may be made at www.cummingsfuneral.com.