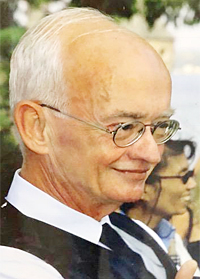 Bruce N. Beattie, 70, of Clayton and formerly of Watertown passed away Saturday, May 12, 2018, at Rochester General Hospital surrounded by his family.

Calling hours will be held at Cummings Funeral Service, Inc., 214 Sterling St., Watertown on Tuesday, May 15, from 3 - 7PM. The funeral mass will be celebrated on Wednesday, May 16, at 10:30AM at St. Mary's Church, 521 James St., Clayton with Revs. Frances Pompei and J. Michael Gaffney co-officiating followed by burial in St. Mary's Cemetery.

Bruce was born May 20, 1947 in Long Branch, NJ, son of Roswell P. and Musetta M. O'Neill Beattie, Jr. He was a graduate of Immaculate Heart Academy in 1965 and of Oswego State.

On May 23, 1970 he married Cynthia Sboro at St. Anthony's Church, Watertown, with Revs. John Pendergast and Robert McGrath co-officiating.

For 30 years he worked for the Dept. of NYS, Taxation and Finance in Syracuse and from 1989 to 1994 he was the business administrator for St. Patrick's Church, Watertown. In 1996 the couple moved to Clayton and he was the owner and operator of both Attilio's Scenic Inn and Attilio's Pizza.

Bruce was a communicant of St. Mary's Church. His greatest love was his family and his ministry to the Franciscan Mystery Players, which he directed for over 40 years. All of his children and three of his grandchildren have had the privilege of participating in his ministry with him. He enjoyed boating, skiing, woodworking, and carpentry.

Donations in his name may be made to the Franciscan Mystery Players, c/o Michele Capone, 145 Bowers Ave., Watertown, NY 13601. Online condolences to his family may be posted at www.cummingsfuneral.com.