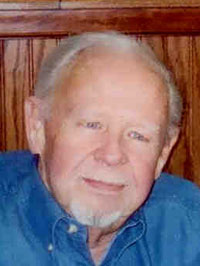 A funeral mass will be celebrated at St. Patrick's Church on Friday, January 18, at 10AM with Rev. Donald Robinson officiating. There are no calling hours. Arrangements are with Cummings Funeral Service, Inc., Watertown.

David was born in Watertown on March 29, 1942, son of Joseph J. and M. Eva Merkley Sovie. He graduated from Immaculate Heart Academy and received his bachelor degree from St. John Fisher College, Rochester, NY. He married Bonnie L. Pinkerton on April 23, 1966 in Rochester and the couple divorced in 2001.

David is survived by his son, David A. Sovie, San Francisco, CA; his daughter, Susan A. Sovie, Sackets Harbor; his brother, Daniel P. Sovie, Florida; and several nieces and nephews. He is pre-deceased by his parents and his brother, R. Joseph Sovie.

Donations in his name may be made to Credo Community Foundation, 595 W. Main St., Watertown, NY 13601. Condolences may be made at www.cummingsfuneral.com.