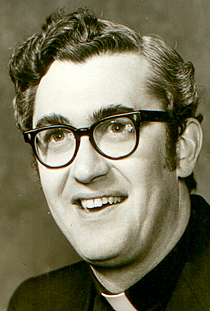 He attended St. Bonaventure University for two years and began his studies to become a Missionary of the Sacred Heart (MSC) in 1961. He completed his philosophy studies in Quebec, Canada and graduated from Laval University in Quebec City in 1964. He completed his theological studies in Rome, Italy and graduated from the Angelicum Pontifical University in Rome in 1968. He was ordained a priest of the Missionaries of the Sacred Heart on June 29, 1968 in Watertown by Bishop Thomas Donnellan.

After ordinaton, Father McDonald taught at the Sacred Heart Preparatory Seminary and Immaculate Heart Central High School (IHC), both in Watertown. In 1972, he became Vice Principal at IHC. In 1976, he became Director of the MSC Retreat and Renewal Center in Shelby, Ohio. In 1983, he became Formation Director for the Missionaries of the Sacred Heart in Bogota, Colombia and in 1985 became Sectional Superior of the MSCs in Colombia.

Father McDonald is survived by his sister Mary (Ted) Mascott of Naples, Florida and sister Sally (John) Sheinman of Rothersthorpe, Northamptonshire, England and his nephew Zane (Michelle) Riester, grandnephew Ian Riester and grandniece Ella Riester, all of Wayne, New Jersey. He is also survived by his uncle William Murrock and his aunt Betty Murrock of Watertown and his aunts Gertrude McDonald and Shirley McDonald of Lowville and many, many McDonald and Murrock cousins. Father McDonald was predeceased by his parents and his grandparents Jennie and Charles Murrock and Elizabeth and Henry McDonald.

In lieu of flowers, memorial contributions may be made to the Sacred Heart Foundation, 668 Thompson Street, Watertown, New York 13601.

Arrangements are entrusted with Cummings Funeral Service, Inc., Watertown. Online condolences to his family may be posted at at www.cummingsfuneral.com.