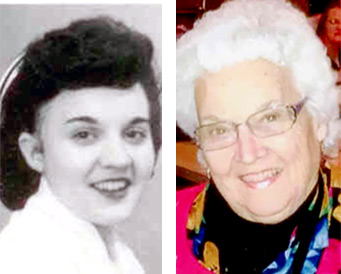 It is with a great deal of sadness that we announce the passing of our dear mother, Jane M. Graham, 90, of 531 S. Massey Street, Watertown from her earthly life to her heavenly home to join our dear father, "Papa.” She left this world on Good Friday, March 30, 2018, at her home, surrounded by her loving family.

Jane was born December 18, 1927 in Cape Vincent, NY, the daughter of the late Aloysius M. and Elizabeth M. Docteur Reff. She graduated in 1944 from Cape Vincent Central School.

She was married to James F. Graham, son of the late John and Elizabeth O'Neill Graham, on May 21, 1949 at St. Vincent DePaul Church, Rosiere, NY with Rev. Walter P. Charbonneau officiating. Mr. Graham died on May 10, 1996.

Jane graduated in 1948 as a Registered Nurse from Mercy Hospital School of Nursing. While raising her nine children, she worked at Ryan's Nursing Home and Mercy Hospital until retiring in April 1990.

Calling hours will be held on Monday, April 2, from 4 - 7PM at Cummings Funeral Service, Inc., Watertown. A prayer service will be held on Tuesday, April 3, at the funeral home at 9:15AM followed by the funeral mass celebrated at St. Patrick's Church at 10AM. Burial will be at the convenience of the family in Glenwood Cemetery.

Jane enjoyed spending time with her husband, Jimmy, at their summer home on Sherwin Bay, Pillar Point. They spent numerous winters together in Florida as well as doing some traveling. Meme worked hard as a nurse and a mother of nine, never asking for much in return, and always finding time for a good laugh with her beloved husband, family, and friends. Most recently Meme enjoyed solving crossword puzzles, playing cards, using her iPad and watching game shows. The time she spent with her family, however, was the most important to her. She treasured the time she had with her family and they valued the time they had with her. She will be greatly missed by all her family and friends. We will especially miss her laugh.

Donations in her name may be made to St. Patrick's Church, 123 S. Massey St., Sisters of the Precious Blood, 400 Pratt St., or Hospice of Jefferson County, 1398 Gotham St., all in Watertown, NY 13601. Online condolences to her family may be posted at www.cummingsfuneral.com.