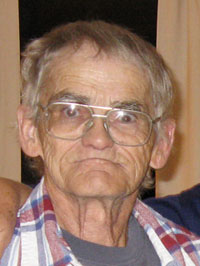 Dana L. Bartlett, 74, Pillar Point, died Sunday morning, January 13, 2013, at his home. The family wishes to thank Hospice of Jefferson County, family, and friends for their care of Dana.

Calling hours will be held at Cummings Funeral Service, Inc., Watertown, on Thursday, January 17, from 6 - 8PM. The funeral service will be at the funeral home on Friday, January 18, at 2PM with spring burial in Brookside Cemetery.

For many years, he was the owner and operator of Bartlett's Welding Service, Watertown, and Bartlett's Ornamental Hangers. He was the Boy Scout Troop Leader of Troop 6 at First Presbyterian Church, Watertown. Dana loved to fish and attending craft fairs with his ornamental hangers.

His brother, Merwyn "Bart", said this of his brother: "Throughout his life, Dana was an ambitious, self-actualized person, which was probably due to his Pilgrim heritage. He was an eleventh generation descendant of Robert Bartlett (1603 - 1676), who arrived at Plymouth Colony on the ship, "Anne" in 1623 (the first Bartlett to arrive in New England). He is also a Mayflower descendant, from Richard Warren, and he had a third great grandfather that fought at Bunker Hill during the Revoluntionary War". "Bart" wrote this poem on December 20, 2012 about Dana, titled A Pilgrim's Soul: Born to sail the seas of the soul, Where sunrise quests, will be their goal... But where do Pilgrim's souls go? A call again to an unknown sea, Where sunset goals will be with me... That's where this Pilgrim's soul goes...

Besides his wife, Ada, he is survived by his son, Nathan C. Bartlett, Watertown; his grandson, Ashton R. Bartlett, Orwell; his brother and his wife, Merwyn "Bart" and Eileen Bartlett, Quitman, TX; and numerous nieces, nephews, and cousins.

Donations in his name may be made to Hospice of Jefferson County, 1398 Gotham St., Watertown, NY 13601. Condolences to the family may be made at www.cummingsfuneral.com.