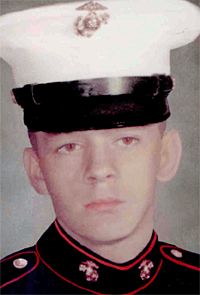 Calling hours will be held at Cummings Funeral Service, Inc., Watertown on Sunday, March 11, from 2 - 5PM. The funeral service will be at the funeral home on Monday, March 12, at 11AM with Rev. Toby Schilling presiding followed by burial in Brookside Cemetery with full military honors.

Tom was born in Watertown on June 1, 1951, son of Harry Edmund and Christine L. (Baker) Booth. He attended Watertown schools before joining the United States Marine Corps on March 27, 1969. He served in Vietnam. Tom received the National Defense Service Medal, Vietnam Service Medal with 1 Battle Star, Vietnam Campaign Medal with device, RVN Cross of Gallantry with palm and frame, Combat Action Ribbon, and the Purple Heart Medal. He was honorably discharged on August 14, 1970.

On August 9, 1969 he married Donna L. Presley at Our Lady of the Sacred Heart.

He was a truck driver for Marcinko's Trucking in Watertown for many years. Tom was a proud member of the Purple Heart Assoc., Disabled American Veterans, and a life member of VFW Post 1400. He loved spending time with his grandchildren and great grandchildren and enjoyed golfing, camping, classic cars, and Harley Davidsons. His friends and family remember what a jokester and story teller he was. With his wife, Donna, on vocals, he also enjoyed playing guitar in several local bands.

In lieu of flowers, donations in his name may be made to Disabled American Veterans, Chapter 18, 216 Haley St., Watertown, NY 13601. Online condolences to Tom's family may be posted at www.cummingsfuneral.com.