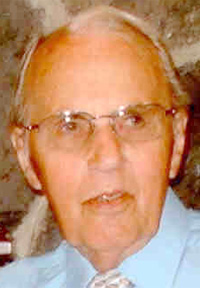 Born in Albany, NY, son of Major Harry G. Taylor and Anna McDonald Taylor, he attended schools in Albany and Troy. He served in the Army Air Corps with the 777th base unit, 147th ACS Squadron and was honorably discharged in 1947 with the rank of Sergeant. He attended Russell Sage College in Troy and graduated from Springfield College, Springfield, MA in 1951 with a degree in Group Work and Community Organization.

Mr. Taylor was the Business Administrator for the Canisteo, NY Central School District, retiring in 1989. He previously had been employed by the Southern Cayuga Central School District and YMCA's in Tuscaloosa, AL, Troy, NY, Burlington County, NJ, and Watertown, NY, where he was Executive Director of the Watertown YMCA from 1967 to 1976.

Upon retirement in 1989 the couple became volunteer caretakers of Land's End, the Presbyterian retreat center on Upper Saranac Lake, NY. After three wonderful years in the beautiful Adirondacks, they moved back to Watertown in 1992. He was a member and past Trustee and Elder for the Watertown First Presbyterian Church. He had been swim coach for the Watertown YMCA and was a long-time certified swim official.

Mr. Taylor was a long-time Rotary member, first joining the Willingboro, NJ Rotary in 1961, then the Watertown Noon Rotary, past president of the Aurora, NY Rotary, member of the Canisteo Rotary, member of Saranac Lake Rotary, then Watertown Sunrise Rotary. He had been Secretary of Rotary District 7040, a Paul Harris Fellow, received the Four Avenues of Service Award from District 7040, and had participated in Rotary Couples Friendship exchanges to England and New Zealand.

He maintained hobbies of camping, bicycling, gardening, piano playing, swimming, genealogy, and landscape painting. He and his wife participated in over thirty Elderhostels.

Calling hours will be held at Cummings Funeral Service, Inc., 214 Sterling St., Watertown, NY on Monday, March 5, from 6 - 8. A funeral service will be at the funeral home on Tuesday, March 6, at 11AM with Rev. Fred G. Garry, pastor of First Presbyterian Church, presiding. Burial will follow in Brookside Cemetery, Watertown.

In lieu of flowers, Mr. Taylor's family requests donations in his name to either First Presbyterian Church, 403 Washington St., or Watertown YMCA, 119 Washington St., both in Watertown, NY 13601. Online condolences to his family may be posted at www.cummingsfuneral.com.