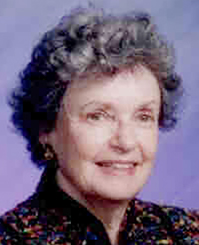 A memorial mass will be celebrated at Holy Family Church on Monday, February 19, at 11AM with Rev. Steven Murray, pastor, presiding. Burial in Glenwood Cemetery will be in the spring. There will be no calling hours and arrangements are entrusted with Cummings Funeral Service, Inc., Watertown.

Peggy was born in Goshen on May 8, 1930, daughter of John E. and Margaret Hendricks Ryan. She attended Watertown public schools and graduated from Watertown High School in 1948. She received a Bachelor of Science degree in Economics and Business Education from the College of Saint Rose, Albany and did graduate work at Syracuse and St. Lawrence Universities.

She taught school in Dexter, which became General Brown Central School. She transferred to Watertown High School in 1966 where she taught Business until she retired in 1989. She was a communicant of Holy Family Church, in which she was very active in church activities, and a member of the Sisters of the Precious Blood Auxiliary. Peggy was a life member of Delta Pi Epsilon. She was a member of the National Honorary Professional Graduate Society in Business Education and served on the Education Committee of the NNY Community Foundation. She was a member of AAUW, the Golden Roses, the Friends of the Roswell P. Flower Memorial Library, the Retired Teachers Foundation, and was an honorary member of the Dexter High School Alumni Association. She also was a member of the Jefferson County Historical Society, where she served as president and on its board, and the Dexter Historical Society. In 1996, Peggy was appointed to the Civil Service Commission for the City of Watertown by Mayor T. Urling Walker, and had served as Chairperson for the Commission for many years.

She is survived by several cousins. Her sister and brother-in-law, Caroline Ryan McDonald and James McDonald, died before her.