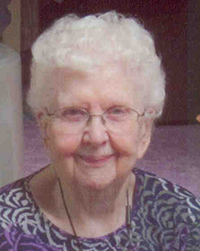 Louise J. Sherman, 93, passed away surrounded by her loving family at her home on Vincent Rd., town of Clayton Saturday evening, February 3, 2018.

A funeral service will be held at Cummings Funeral Service, Inc., Clayton on Saturday, February 10, at 10AM with Rev. D. L. Marshall presiding. There will be no calling hours.

Louise was born in Brownville on April 20, 1924, daughter of William and Cora Adams Phelps and graduated from Dexter High School. On November 25, 1943 she married Robert J. Sherman in the parsonage of Clayton United Methodist Church and Mr. Sherman died May 6, 2016.

She enjoyed being a homemaker for her family, but also worked as a store clerk at Cerow's Grocery and Reinman's Newsstand, both in Clayton and at Compeau's Grocery in Depauville and as a bookkeeper for Murray Kenny. Louise was a former member of Depauville United Methodist Church. She enjoyed knitting, crocheting, puzzles, baking, traveling, and especially spending time with her grandchildren and great grandchild.

Donations in Louise's name may be made to either the Depauville Volunteer Fire Dept., PO Box 99, Depauville, NY 13632 or TIERS, PO Box 524, Clayton, NY 13624. Online condolences to her family may be posted at www.cummingsfuneral.com.