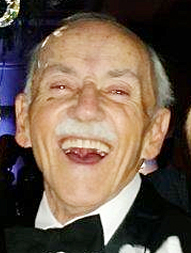 Larry W. Aubertine, a fantastic father and grampie, loving husband, mechanic/fabricator/welder/ inventor extraordinaire, passed peacefully at home on Tuesday, January 30th. A fighter and survivor, he finally succumbed to a broken heart and is now with his bride who passed on ahead in June of 2017.

Born at his family's home in Rosiere, NY on July 7, 1933, much of his childhood was spent on the White family farm. He was an active member of the Boy Scouts of America attending numerous jamborees across the country and was awarded the Order of The Arrow.

Upon his graduation from Clayton High School in 1951, he went to work for the New York Air Brake and then on to Carr & Bits Construction who was a subcontractor for the NY Telephone Company. After a summer of handling dynamite for "pole holes," he enlisted in the US Air Force in the fall of '52. He was stationed at Keesler AFB, Biloxi, Mississippi and then off to France as an Air Traffic Control Operator. He always spoke of his escapades in Paris and we are still astounded that he returned state-side without international incidents. He was honorably discharged in 1956 after attaining the rank of Staff Sergeant and receiving the National Defense Service Medal and Good Conduct Medal.

As a civilian again, he went to work as an inspector for the Army Corp of Engineers on the St. Lawrence Seaway Project and remained there until it’s completion in 1959. The Volkswagen "Bug" finally bit him when he started working at Harblin Motors in Watertown. His career eventually changed paths when he was hired by Watertown Welding Supply, Black Clawson Company and back to the New York Air Brake in the Hydraulics Lab. He accepted a position at Carthage Machine as a foreman, but missed the hands-on work and fabrication. He returned to the Air Brake and eventually on to the NY State Department of Transportation as a welder of most anything and everything. He did retire from the DOT, but was hired back as a consultant welder for a time.

Dad was also an Welding Instructor in the Adult Education Program at Jeff-Lewis BOCES, Watertown. It was a bit hard for him at first, but he loved welding and sharing his knowledge. He was very pleased when Mom took his course; that is, until she set her pants on fire during class! That ended her welding career in a jiffy.

He was the proud proprietor of AUBERTINE’S REPAIR SERVICE, which was open every night after work and on the weekends for over 30 years. The driveway was always filled with Volkswagens. Folks would stop in for a quick spot-welding job or assistance with a complicated fabrication. Advertising was not required as his reputation and work ethic was all he needed.

Dad was also a huge NASCAR Fan which originated from his own racing career. He started running his own car in 1956. That lasted a short time due to an "incident" on turn three at Watertown Speedway. In 1957, he then started driving for the "Little Susie" Racing Team, Depauville, NY. He later built vehicles with Ted Schneider that were driven by Pat Bazinet run at tracks in Kingston, Brewerton, Hogansburg, and Watertown.

Volunteering and giving of your time were a requirement in our home. Dad gave 30 years as Volunteer to the Clayton community. In local government as the Chairman of the Clayton Local Development Corporation until 2013 and a 25-year member of the Clayton Town Planning Board until his retirement December 2017.

A life-long communicant of St. Mary's Church in Clayton, he was a Bishop Conroy General Assembly 4th Degree Knights of Columbus. He was also a member and past Grand Knight of the Thousand Islands Council 350, Clayton.

Last, but certainly not least, he is survived by his children, Susie O'Neill and her partner in crime, Joe Chrisman, Sally and husband Bob Fancher, Shelly Jo and husband Achim Fiebich, and David and wife Gretchen Aubertine; his grandchildren – which were the twinkle in his eye – Molly "K" and husband Brian O'Donnell, Zoe and Anna Fancher, Thomas (TJ) and Casey Fiebich, and Samantha (Sammy) Aubertine; his sister, Patricia Bristol and many, many friends, neighbors, cousins, nieces and nephews that meant the world to him. He predeceased by a grandson, Larry Fancher and the Love of his Life, our Mom, Annie Aubertine. His patience and kindness will leave a void for all those that knew him. He will truly be missed.

Arrangements are entrusted with Cummings Funeral Service, Inc., Clayton. Online condolences to his loving family may be posted at www.cummingsfuneral.com.