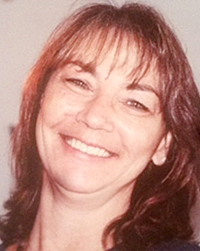 Victoria Lynn "Vickie" Guyett, 61, passed away at her home in Clayton surrounded by her family on Sunday, January 21, 2018.

A celebration of her life will be held Saturday, February 3, from noon to 3PM at O'Brien's Restaurant, Clayton. Arrangements are entrusted with Cummings Funeral Service, Inc., Clayton.

Vickie was born in Santa Rosa, CA on February 22, 1956, daughter of Arthur and Patricia Rowe Delasantos. She was a graduate of Santa Rosa High School and Long Beach Business School. On November 23, 1978 she married Joe A. Guyett in Santa Barbara, CA.

She worked as a bookkeeper for Bookkeepers Business Service, Long Beach, CA. The couple came to Clayton in 1980 and stayed until 1985, then back to CA until 1992, and then the couple returned to Clayton. She worked for Harbor Inn, H&R Block, and in the summer, for Millens Bay Inn. Vickie then worked as a bookkeeper for twelve years for Steve Taylor Builders. She was very active with her children's lives, being a stay-at-home mom while they grew up, and she especially enjoyed being a Cub and Girl Scout Mom. Vickie also enjoyed drawing, painting, and cooking. Her greatest enjoyment, though, was spending time with her grandchildren.

Donations in her name may be made to Hospice of Jefferson County, 1398 Gotham St., Watertown, NY 13601. Online condolences to Vickie's family may be posted at www.cummingsfuneral.com.