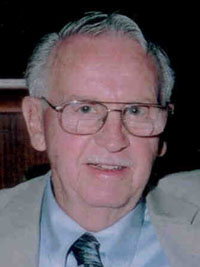 Calling hours will be held at Cummings Funeral Service, Inc., Watertown on Thursday, January 10, from 4 - 7PM. The funeral service will be at the funeral home on Friday, January 11, at 11AM with burial following at Glenwood Cemetery.

Mr. Derouin was born in Watertown on January 5, 1927, son of Leo N. and Violet LaJuett Derouin, and he graduated from Watertown High School. He entered the US Navy on December 27, 1944 and served as a Fireman First Class. He was honorably discharged on August 3, 1946.

He was a Master Plumber, licensed in the City of Watertown and was the former owner and president of Derouin's Plumbing and Heating. He also held a Master Plumbers license for Palm Beach County, FL and he and his wife had wintered in FL. Mr. Derouin was a former member and past president of the Plumbers and Pipe Fitters Joint Apprenticeship Council for Jefferson, Lewis, and St. Lawrence Counties and of Northern NY Builders Exchange. He was the founder of Watertown Archer's Assoc. and former owner of the Archery Shop on Factory St., Watertown. He was a member of Watertown Golf Club, was an avid bird hunter, and enjoyed painting.

In lieu of flowers, the family wishes donations in his name to Hospice of Jefferson County, 1398 Gotham St., American Legion Post 61, 138 Sterling St., or VFW Post 1400, 231 Bellew Ave., all in Watertown, NY 13601 or to a charity of your choice. Condolences to the family at www.cummingsfuneral.com.