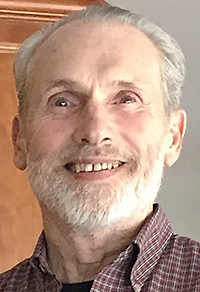 Garvin was born February 24, 1942 to Vincent and Georgia Lee Cook in Kansas City.

Garvin graduated from Northeast Senior HS in 1962 and immediately enlisted in the Air Force and served proudly.  While in the Air Force, he was stationed at Dry Hill Air Force Base in Watertown, NY where he met his future wife, Barbara M. Capone.  They were married on May 2, 1964 at St. Anthony’s Church in Watertown.

In 1966 he began his career at the New York Air Brake, first as a Machinist and later as a Process Engineer.  He retired from the Air Brake in 2004.

As a young man, Garvin was proud that he achieved his Eagle Scout Award in the Boy Scouts. He enjoyed traveling, reading, crossword puzzles, and working in the workshop.  Where ever he traveled he always made daily mass a priority in his life. He was an avid wood worker, especially with clocks and wooden gadgets.  He was a loving father who enjoyed spending time with his family and friends, and will be greatly missed.

Garvin was preceded in death by his parents, and his wife, Barbara.  He is survived by his children, Vince (Terri) Cook, Jim Cook, Anna (Mike) Doldo, and Renee (Jeff) Thomas; his sisters, Gail Nestell and Sheila Cook; grandchildren, Danielle, Billy, Drew, Tyler, and Matt; great grandchildren, Tyler and Savannah; many nieces and nephews; and dear friend Maria Fortunato.

Calling hours will be held at Cummings Funeral Service, Inc., Watertown on Thursday, January 4, 2018 from 4 - 7PM.   A prayer service will be at the funeral home on Friday, January 5 at 10:15AM followed by a funeral mass at 11AM at Holy Family Church.  Burial in Glenwood Cemetery will be in the spring at the convenience of the family.

Donations in his name may be made to either Holy Family Church, 129 Winthrop St., or the Children's Miracle Network, 830 Washington St., both in Watertown, NY 13601. Online family condolences may be made at www.cummingsfuneral.com.