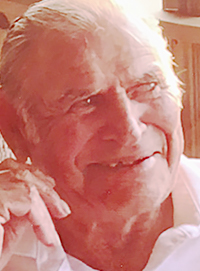 H. Gordon Bailey passed away at Samaritan Medical Center in Watertown, NY surrounded by his family on Sunday, December 24, 2017, at the age of 88. He was born on September 7, 1929 in Binghamton, NY to the late Eugene Bailey and Christine Belleville Bailey.

Gordon was a life long resident of Eastline Road in Clayton, NY. He enjoyed spending time with family and friends. His passion was tending to his cows on his farm.

Calling hours will be held at Cummings Funeral Service, Inc., Clayton on Thursday, December 28, from 4 - 7PM. A prayer service will be at the funeral home on Friday, December 29, at 10:15AM followed by the funeral mass celebrated at St. Mary's Church at 11AM with Rev. Arthur J. LaBaff, pastor, presiding. Private burial will be in the spring at the family's convenience in St. Mary's Cemetery.

Memorial contributions may be made to St. Mary's Church, 521 James St. and Thousand Islands Emergency Rescue Service (TIERS), P. O. Box 524, both in Clayton, NY 13624. Online condolences to his family may be made at www.cummingsfuneral.com.