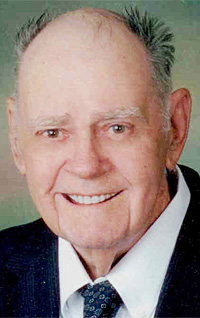 Calling hours will be held at Cummings Funeral Service, Inc., Watertown on Tuesday, December 26, from 9:30 - 11:30AM followed by the funeral service at Noon at the funeral home with Rev. Steven Murray, pastor of Holy Family Church, presiding. Burial in Glenwood Cemetery will be at the convenience of the family in the spring.

He worked as a welder at St. Regis Paper Co. which then became Champion International, Deferiet, and retired after 46 years of service to the company. Norman enjoyed crossword puzzles, yard work, and puttering in his garage. Some of his greatest enjoyments were the NY Yankees, time at the cottage in Sackets Harbor, and all his friends and family.

Along with his wife, Jennie, Norman is survived by his two sons and their wives, Carl and Jennifer, Black River, and Gary and Joanne, Travelers Rest, SC; six grandchildren and five great grandchildren; two siblings, Evelyn "Evie" Keddy, Carthage and Gerald and Dixie Egeberg, Melbourne, FL; and several nieces and nephews. He had four sisters predecease him: Elizabeth Reape, Vivian Preivo, Dorothy Quinlavin, and Margaret Brand.

In lieu of flowers, the Norman's family would like donations in his name to Samaritan Summit Village Activities Fund, 22691 Campus Dr., Watertown, NY 13601 or a charity of your choice. Online condolences to his family may be made at www.cummingsfuneral.com.