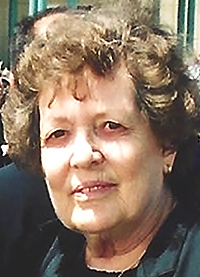 Roberta Ann Strouse passed away at her home in Clayton, New York surrounded by her family, on Monday, December 11, 2017, at the age of 82.   She was born on August 7, 1935 in Clayton, to the late Glenn and Frances Howe.

She graduated from Clayton Central School in June 1954 and married Peter Milton Strouse on September 19, 1955 in the United Methodist Church of Clayton.  They would have five children.

Roberta was a consummate homemaker and enjoyed spending time with her family and friends.  She loved the outdoors and was an avid boater, skier, and snowmobiler.

Roberta was a life-long resident of Clayton.  She was an active member of the community; volunteering for the Antique Boat Show, Clayton’s annual Christmas Parade, and various activities of the Thousand Islands Museum.

She was lovingly cared for by her daughter, Susan for many years and by Jennifer Dennie, Janet Klock, Kayla Morgan, and her niece, Diane Reff Morinigo during the last several months. The family also wishes to express their deepest gratitude to Hospice of Jefferson County, who provided remarkable care during her final days.

She was preceded in death by her husband, Peter, on September 5, 2014; her brother William (Janet) Howe; and her sister, Rachel (Cortland) Reff.  She is survived by her children, Michael, Keith, Susan Marshall and James, of Clayton and Steven, of Margate, FL.  Also surviving are her brother, Garth Howe of Lake Placid, FL; six grandchildren and nine great-grandchildren.

Memorial services will be held on Saturday, December 16, 2017 at 1:00 p.m. at the United Methodist Church, Clayton, NY.  A spring burial in Clayton Cemetery will be announced. There will be no calling hours and arrangements are entrusted with Cummings Funeral Service, Inc., Clayton.

Memorial contributions may be made to Hospice of Jefferson County, 1398 Gotham Street, Watertown, NY 13601 and the Thousand Islands Emergency Rescue Service Inc. (TIERS), P.O. Box 524, Clayton, NY 13624. Online condolences to her family may be made at www.cummingsfuneral.com.