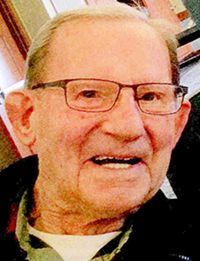 A memorial mass at St. Patrick's Church will be held in the spring at a time and date to be announced. Burial in Glenwood Cemetery will also be in the spring. There will be no calling hours and arrangements are entrusted with Cummings Funeral Service, Inc., Watertown.

After their marriage, the couple moved to Michigan for 40 years. Warren worked for General Electric Co. in St. Claire Shores, MI from 1962 until his retirement in 1995 as a Field Engineer. He then worked a short time for Detroit Apparatus Services in Riverview, MI. In 2009 the couple returned to the north country. He was a communicant of St. Patrick's Church.

Along with his wife, Carmel, he is survived by his sister, Barbara Bradsell, Harrisville, MI and numerous nieces, nephews, and cousins. His two brothers, Frederick "Carl" and Norman Breathour, and his sister, Virginia Stecker, died before him.

In lieu of flowers, the family wishes donations to the American Heart Assoc./American Stroke Assoc., PO Box 3049, Syracuse, NY 13220, or Hospice of Jefferson County, 1398 Gotham St., or St. Patrick's Church, 123 S. Massey St., both in Watertown, NY 13601. Online condolences to his family may be made www.cummingsfuneral.com.

#2 Carol Tesch 2017-12-20 22:15
I only knew Warren from The Summit weekly Mass.
We spoke shortly each time. His devotion to Carmel
was remarkable and several of us said we had never
seen such tender devotion. His eyes expressed the pleasure he felt when speaking to me. I so looked forward to seeing him. Go with God, Warren.
You will be missed.