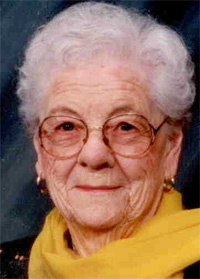 She was a self-employed hairdresser in Theresa for 25 years, living in Theresa from 1950 to 2001. She then lived in Evans Mills and Adams before moving into Summit. Edna was a very active member of Depauville Order of the Easter Star and served as its Matron on two separate occasions.  At the age of 80, she learned to swim.

Graveside services in St. Lawrence Cemetery, town of Cape Vincent, will be held at a time and date to be announced in the spring of 2018. There will be no calling hours. Arrangements are entrusted with Cummings Funeral Service, Inc., Clayton.

In lieu of flowers, donations in her name may be made to a charity of choice or to South Jefferson Rescue Squad, Inc., 38 Main St., Adams, NY 13605. Online condolences to her family may be made at www.cummingsfuneral.com.