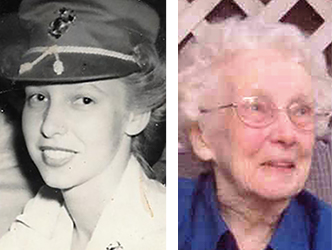 Ada Elizabeth "Betty" Schafer of Sackets Harbor, NY, formerly of Edgewood, PA, passed away peacefully, at her daughter's home on Saturday, November 25, 2017. She was 92. Born December 6, 1924 in Trafford, PA, she was the daughter of the late Kenneth Wray Jones and Anna Brodbeck Jones.

Betty graduated from Trafford High School in 1942. She attended Business School at what is now Point Park College in Pittsburgh, PA. She worked as a secretary at Westinghouse in Trafford, PA. She then proudly served in the Women's Marine Corps at the end of World War II where she was stationed at Camp Henderson in Washington DC. Following her time in the service, she attended the Art Institute of Pittsburgh.

In 1947, she married Frederick Eugene Schafer and they settled in Swissvale, PA, and from there moved to Edgewood, PA, where they raised their seven children. Betty remained in Edgewood until 2015. At the time of her death she was residing in Sackets Harbor, NY with her daughter Elizabeth Murphy. While in Edgewood, Betty was a member of the Edgewood Presbyterian Church and the Edgewood Historical Society. She also earned her real estate license and worked for Gardner Fisher Real Estate. In 1977 and 1979, she won the "Outstanding Multi-List Producer" Award. Betty truly enjoyed helping people find a home that they loved. Everyone she sold a home to became her friend.

She is survived by five children, Martin Schafer of Los Banos, CA, Jeanne Burkhalter and her husband John of Opelika, AL, Elizabeth Murphy and her husband Donald of Sackets Harbor, NY, Fred Schafer and his wife Robin of Palo Cedro, CA, and Ann Wilson and her husband Michael of Denton, MD, a daughter-in-law, Peggy Schafer of Forest Hills, PA, and a sister-in-law, Dorothy Jones of Monroeville, PA, thirteen grandchildren, and two great grandchildren and numerous nieces and nephews. She was preceded in death by her husband of 40 years, Frederick Eugene Schafer, two sons John Schafer and James Schafer, a brother William Jones and two sisters, Margaret Meadowcroft and Joan Dettis.

Betty enjoyed the simple things in life: A cup of hot tea in a fine china cup, a good home-cooked meal, an old movie on Turner Classic Movies, a pretty linen handkerchief, and getting a good bargain. She was creative and artistic, and she displayed these talents through her love of sewing and refinishing and caning antique rocking chairs. Anyone who ever received a gift from her will remember the beautiful handmade bow she created with real fabric ribbon and the handmade box. She loved turtles and had an extensive collection of turtle ornaments and figurines. She will be remembered for her delicious homemade bread, rolls, and pies that she prepared for her family and friends. She enjoyed following the daily news, the stock market, and the events in the business and financial world. She believed in wasting nothing and was very resourceful. Long before repurposing was even a word, she found practical ways to reuse almost everything. She was always grateful for her many blessings. Betty loved her country. She was very patriotic and never forgot the sacrifices and impact of the events of World War II.

The family would like to thank Carolyn Lees of Adams Center, NY, for the compassionate and skillful care and warm friendship that she lovingly provided to "Grandma B." As Betty requested, services will be private. A memorial service will be held in Pittsburgh, PA, in Spring of 2018. She will be dearly missed and live in our hearts forever. The family requests memorial contributions may be made in her memory to Smile Train www.smiletrain.org or Missing in America Project www.miap.us. Local arrangements are entrusted with Cummings Funeral Service, Inc., Watertown and online condolences to her family may be made at www.cummingsfuneral.com.