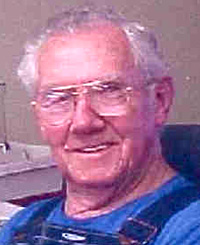 The spring graveside service for Thomas M. Bogenschutz, Sr. will be Saturday, April 27, at 1PM at St. Mary's Cemetery, Clayton.

Mr. Bogenschutz was born in Clayton on March 15, 1921, the son of Frank A. and Gertrude G. Garnsey Bogenschutz. He graduated from St. Mary's High School in 1940.

On July 4, 1941 he married Veronica Gates at St. Mary's Church, Sterlingville, and they were the last couple to be married in that church.

He entered the US Army Air Corps in 1945 and served for a few months before his discharge later that same year.

He began his career in engineering with Frink SnoPlow, Clayton as a machine operator. He then worked for the family business in machine design and fabrication at Bogenschutz Bros. and designed, built, and patented a machine for processing honeycomb which is still used today by Sue Bee Honey. He was a machine operator for NY Airbrake, Watertown, then a manufacturing engineer for General Electric Co., Schenectady and Syracuse. He went to work for General Dynamics, Rochester. Tom then started his own business, Bogenschutz Machine Co. He returned to Frink SnoPlow as a manager of engineering, and then to NY Airbrake until he retired as a project engineer. In his many years as an engineer, he was granted a total of fifteen US patents, built six houses, and refinished others.

Tom was a member and past Grand Knight of the Knights of Columbus Council 350, member of American Legion Colon Couch Post 821, and was a charter member of the Frink Club. He enjoyed boating and fishing. He researched extensively his family geneology and enjoyed hashing over history at the T. I. Museum. The last of the six houses he built was his summer cottage on Grindstone Island. His special love was his beloved white poodle, Katie.

In lieu of flowers the family wishes donations in his name may be made to either Hospice of Jefferson County, 1398 Washington St., Watertown, NY 13601 or the T. I. Museum, 312 James St., Clayton, NY 13624. Condolences may be made to the family at www.cummingsfuneral.com.