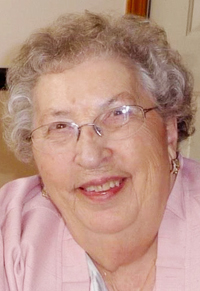 Calling hours will be held at Cummings Funeral Service, Inc., Watertown on Tuesday, August 15, from 4–7 PM. A prayer service will be at the funeral home on Wednesday, August 16, at 9:15 AM followed by the funeral mass celebrated at St. Patrick's Church at 10 AM with Fr. Tim Canaan, cousin, presiding. Burial will be in Glenwood Cemetery. As per Mary's wishes, all attending are asked to wear bright clothing or Irish accents in celebration of her life.

Mary was born in Watertown on August 29, 1922, daughter of John T. and Elizabeth O'Neill Graham. She attended the one-room schoolhouse, Watertown Center Country District 6, then St. Patrick's School, and was a 1940 graduate of Immaculate Heart Academy. She then received her LPN from The House of the Good Samaritan School of Nursing.

For 25 years she served Mercy Hospital as an LPN, retiring in 1985, and was a volunteer for Hospice for three years. Mary was a communicant of St. Patrick's Church and a member of its Altar & Rosary Society. She had been in the auxiliary of the Knights of Columbus. She served as secretary for the local AARP and the Town of Watertown Historical Society. On April 29, 2017, Mary received the Immaculate Heart Central School Distinguished Alumnus Award.

To honor her memory, donations in Mary's name may be made to Hospice of Jefferson County, 1398 Gotham St., Watertown, NY 13601. Online condolences to her family may be made at www.cummingsfuneral.com.