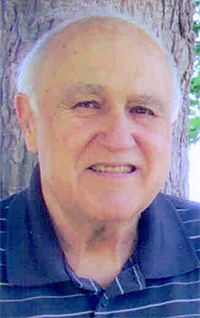 C. Richard Amo, 78, of Lazy Acres, Cape Vincent, passed away on August 6, 2017 in the emergency room of River Hospital after being stricken at his home. Calling hours will be on Wednesday August 9th from 5:00 to 7:00 pm at the Cummings Funeral Service, Inc. 320 John Street, Clayton. The funeral and burial at Clayton Cemetery will be held at the convenience of the family. A celebration of Life will be held on Thursday August 10, 2017 at the Roxy Hotel at 1:00 pm with Mother Nancy C. Betz, officiating. Contributions may be made in his name to a charity of one's choice.

Mr. Amo was born in Watertown on January 9, 1939, the son of Charles Henry and Geraldine Bishop Amo. He graduated from Cape Vincent High School in 1957, and had been a member of the National Guard Reserves. He married Mary Lou Brigham on April 8, 1961 at Christ Episcopal Church in Clayton. He was a salesman for Alheim Brothers, Watertown and Gray's Wholesale, Inc., Clayton. Dick then was co-owner of the B & D Convenience Store and the Kleen-it Center, both in Clayton.

A member of Christ Episcopal Church, a former member of the Clayton Lions Club, the Thousand Islands School Board member, he enjoyed reading and golf, and the couple had wintered in Surfside Beach, South Carolina for a number of years.

Dick is survived by his loving wife, Mary Lou; his daughter, Shayne M. and her husband Paul Robbins; his son, Shannon D. and his wife, Jill Amo; four grandchildren, Cameron E. and Alleigh M. Robbins, Madyson L. and Kennady M. Amo, all of Cape Vincent; his brother William and his wife Marianne Amo, Conn; and a niece, a nephew and cousins.

Online condolences can be made to www.cummingsfuneral.com.