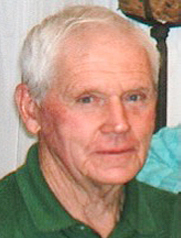 Louis E. Martin, 90, of Broadway Avenue West, passed away Saturday morning at the Samaritan Medical Center where he was a patient since August 3, 2017. A funeral service will be held at the Cummings Funeral Service, Inc., Watertown, on Wednesday August 9, at 10:00 am with Rev Steven Murray, pastor, of Holy Family Church officiating and burial will follow in Glenwood

Mr. Martin was born in Watertown on December 31, 1926, son of Allan and Gwyneth Rowland Martin and graduated from Immaculate Heart Academy. He served in the United States Navy from December 27, 1944 until his discharge on July 19, 1946, continuing on inactive reserve until July 19, 1950. He served on the USS Hornet receiving the American Theater Medal, the Asiatic Pacific Medal and the World War II Victory Medal. On June 30, 1951 he married Mary Ellen Lyng at St. Patrick's Church, Watertown. Mrs. Martin died on May 17, 2017.

Mr. Martin was employed by New York Telephone Company for 35 years, retiring as a District Engineer.

Donations may be made in his name to either Sisters of Saint Joseph, 1425 Washington Street or Hospice of Jefferson County, 1398 Gotham Street, both in Watertown, NY. Online condolences to the family may be made at www.cummingsfuneral.com.

#6 Lou Kibling 2017-08-08 06:46
Extending our sincere condolences and prayers to the Martin family. Lou was admired and respected by many.

Report to administrator
#5 Joan Grappotte Carlo 2017-08-07 21:40
I am so sorry for your loss. My thoughts and prayers are with you.
Report to administrator
#4 Steven W. Adams 2017-08-07 16:12
We send our condolences to your family in the passing of Mr. Martin, Lou, to my dad Bill Adams.
My dad, Bill Adams, had the utmost respect for Lou, and that, to me, speaks volumes about his level of personal and professional qualities. They worked together at the Coffeen Street NY Tel location for a few decades. The many company picnics and annual office open house activities are still a topic of conversation, as we look back over the years at the continual changes, developments in telecom technology.
I wanted to say thank you Lou, as well as our sympathies to the family, for your dad's role in my dad's proudest professional moments, a constant source of conversation well into his 80's.
Best Wishes Always.