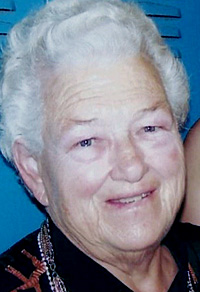 A funeral service will be held at Cummings Funeral Service, Inc., Watertown on Saturday, December 29, 2012, at 2PM with Rev. Toby Schilling officiating. Spring burial will be in Clayton Cemetery and there are no calling hours.

Mrs. Radley was born in Clayton on September 10, 1936, daughter of Irwin and Jessie McRae Turcotte. She graduated from Clayton Central School and Watertown School of Commerce. On July 14, 1956 she married John L. Gokey in Clayton and the marriage ended in divorce. She then married Lionel A. Radley, Sr. on August 18, 1972 in Cape Vincent, and he died January 20, 2008.

Sally had been employed by NYS DOT as a draftsman and NY Telephone Co. as a secretary. She was a member for 37 years of the Cape Vincent American Legion Auxiliary. She enjoyed reading, canning, and sitting by the St. Lawrence River. She was an avid traveler, having visited all 50 states and wintering in Tombstone, AZ, but her most favorite past-time was spending time with family and friends.

The family wishes to thank her didicated caregivers that enabled her to remain in her home on the River.

Donations in her name may be made to Cape Vincent Volunteer Ambulance Squad, 241 E. Broadway St., Cape Vincent, NY 13618.