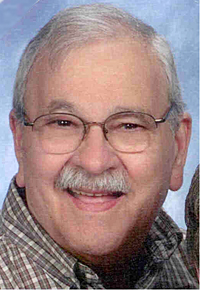 Calling hours will be held at Cummings Funeral Service, Inc., Watertown on Thursday, July 6, from 5 - 8PM. A prayer service will be at the funeral home on Friday, July 7, at 9:30AM followed by the funeral mass celebrated at 10AM at St. Anthony's Church with Msgr. Robert Aucoin, pastor, officiating. Entombment will be in Glenwood Mausoleum.

Patsy was born in Watertown on April 21, 1928, son of Natale and Antonette Schocchetti Carbone. He attended Boon St. School and was a graduate of Watertown High School. He served actively in the US Army from May 22, 1951 to May 9, 1953 and was honorably discharged from the Reserves on May 21, 1957.

On December 14, 1959 he married Marie McDonald at Our Lady of the Sacred Heart Church with Rev. Benoit C. Dostie presiding. Mrs. Carbone died May 10, 2016.

He owned the Carbone Bros. Plaza on Coffeen Street. Patsy was a communicant of St. Anthony's Church, a member of the Northside Improvement League, and a life member of Elks Lodge 496. He enjoyed card playing, the Boston Red Sox, and wagering on horse races. He was known as a compassionate, loving, and accepting mild mannered gentleman.

The family would like to thank Dr. Sindhu and the nursing staff at Watertown Dialysis Center for their excellent care throughout the years. Additionally, they would like to extend a special thank you to Maryann O'Rouke.

Donations in his name may be made to Hospice of Jefferson County, 1398 Gotham St., Watertown, NY 13601. Online condolences to his family may be made at www.cummingsfuneral.com.

12
#11 carol m. lamon 2017-07-20 17:44
I am so sorry to see that you have lost your dad. I will keep you all in my thoughts & prayers.
Report to administrator
#10 Bill Marincic 2017-07-07 06:52
My deepest condolences to Chrissy, Patty and Lisa. There was no better man than your father whom was always there for me growing up, he was my mentor who would take me fishing and was like a father to me. It's truly a sad day.
Report to administrator
#9 Linda Turner 2017-07-06 16:42
It is with a sad heart that such a good man has left us. Mr. Carbone held a special place in my memory. Patti, Lisa, Chris and family..my heartfelt sorrow and deepest sympathy on the loss of your father. May God's peace be with you.
Love Linda Frank Turner
Report to administrator
#8 Fr. Doug Decker 2017-07-05 10:18
Prayers and best wishes your way. I know of your loving care for your Dad. Will never forget your help with the Harvest Dinner. God's light and support these days... Fr. Doug Decker
Report to administrator
#7 katrina Mora 2017-07-03 06:48
wonderful memories of Pat and Toot from the store in my childhood. such a nice man.
Report to administrator
#6 theresa pustizzi 2017-07-02 22:43
Sorry to hear about your father. He was such a nice person. My thoughts are with all of you. God Bless
Report to administrator
#5 Debbie Mallette 2017-07-02 13:58
I am so saddened to hear of Pat's passing. I will always remember him as such a sweet and wonderful man! From the time I was old enough to come into Carbones; he was ALWAYS the smiling face to welcome all! I send my dearest condolences to all you girls and your families!
Report to administrator
#4 Kathie Grant 2017-07-02 10:06
Patti I am so sorry to hear about the loss of your dad. I want you to know he was such a pleasure to care for and the last time I saw him he put a smile on everyones face. My thoughts and prayers are with you and your family.
Report to administrator
#3 Frank Molinari 2017-07-01 19:28
To Pat's family,
So sorry to hear of the passing of Patsy Carbone. He always greeted you with a smile when entering the grocery store. Many of my fond childhood memories included fun times at Carbone's Grocery Store. Both he and his brother 'Toot' welcomed kids into their store and provided a safe and fun atmosphere. RIP Pat. You deserved it!
Report to administrator
#2 Chere Busler Phelps 2017-07-01 16:25
Dear Chris, Patti and Lisa,

Our heartfelt prayers and condolences are with you and your families. Your mom and dad will always hold a special place in my heart. They are part of my most treasured memories - spending time with Papa and Grandma on Bellew Ave. and enjoying many visits back and forth across the street.