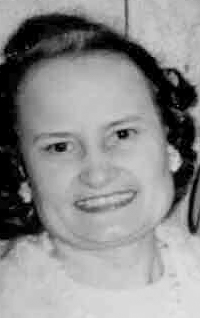 Calling hours will be held at Cummings Funeral Service, Inc., Watertown on Thursday, June 22, 2017, from 4 - 7PM. The funeral mass will be celebrated at Our Lady of the Sacred Heart Church on Friday, June 23, 2017, at 11AM with Rev. Jonas Tandayu, MSC, pastor, presiding with burial following in Glenwood Cemetery.

Peggy was born in Philadelphia, NY on July 11, 1917, daughter of Louis and Rosa Muglia Pepe. The family moved to Watertown when she was five and she attended school in Watertown. On September 30, 1940 she married Hugh H. Marks, of Dexter, at St. Anthony's Church and Mr. Marks died August 21, 1977.

For 22 years she worked at Sears, retiring in 1985 as a sales associate. After her retirement, she volunteered at Samaritan Keep Home for 22 years. During high school she was a proud member of the quartet, "The Four Shades of Blue". She had been active and was a past president of the Cooper St. PTA. Throughout her life Peggy enjoyed baking, reading, and singing.

Donations in her name may be made to Our Lady of the Sacred Heart Church Endowment Fund, 320 W. Lynde St., Watertown, NY 13601. Online condolences to Mary's family may be made at www.cummingsfuneral.com.