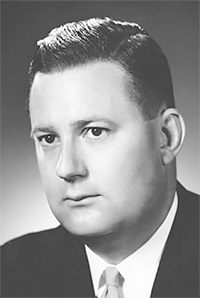 Bruce was born in Malawi, Africa on March 25, 1933.  He attended Highgate School in England where he excelled in cricket and rugby.  He trained as an accountant and married Janet (Jane) Farmer in 1955.  With Joanna and Fiona, their two eldest daughters, they emigrated to Canada in 1958.

Bruce began his accounting career at Coopers & Lybrand in Montreal as an auditor.  Bruce and Jane welcomed John to the family in 1960 and moved to Toronto to work in industry. Michael, Sarah and Mark were born in Toronto where Bruce continued his career as a Vice President of Finance and Operations with a Canadian holding company.

Bruce retired as Vice President, Finance at Clarkson University.  He spent 10 years leading operations, major fund raising initiatives and capital campaigns.  He spent his retirement with Jane in Clayton, New York where he was active with St. Mary's Parish and the Diocese of Ogdensburg and the Clayton Yacht Club.

The funeral mass will be celebrated on Friday, June 2, 2017, 11AM, at St. Mary's Church, Clayton with Rev. Arthur LaBaff, pastor, presiding. Burial will follow in St. Mary's Cemetery. There will be no calling hours and arrangements are entrusted with Cummings Funeral Service, Inc., Clayton.

In lieu of flowers, the family requests contributions in his name to St. Mary's Church, 521 James St., Clayton, NY 13624. Online condolences to his family may be made at www.cummingsfuneral.com.