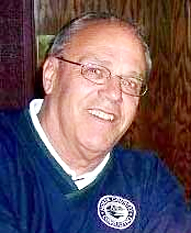 Calling hours will be held at Cummings Funeral Service, Inc., 214 Sterling St., Watertown on Thursday, April 20, from 4 - 7PM. The funeral mass will be celebrated at 10:30AM on Friday, April 21, at Holy Family Church with Rev. Steven Murray, pastor, presiding. Burial in Calvary Cemetery will be at the family's convenience.

Steve was born in Watertown on November 6, 1947, son of William T. and Alberta I. Sixbury Zimmerman. He was a 1965 graduate of Watertown High School and attended Jefferson Community College. Steve entered the US Army on September 7, 1967 and was honorably discharged from the reserves on August 7, 1973. He married Jane J. Leary on October 4, 1969 at Emmanuel Congregational Church and although the marriage ended in divorce, the two remained friends.

Steve served as Executive Vice President of Key Bank and then as Senior Vice President of Jefferson National Bank. He later worked for Prudential Insurance Company and most recently for North Country Consulting. Earlier in his career, he also served as an adjunct instructor at Jefferson Community College. Steve was Catholic and a member of Elks Lodge 496. Throughout his career, he was involved with many organizations including the Jefferson County Chamber of Commerce, American Heart Association, Black River Valley Club, United Way of Jefferson County, Ives Hill Country Club, and Italian American Civic Association.

Steve very much enjoyed spending time with his grandchildren, especially at their sporting events. He enjoyed playing golf and took pride in helping with the annual DiStefano Memorial Golf Tournament. Steve was an avid Yankees and Syracuse fan, and he never missed an episode of The Young and The Restless. When not with his family or friends, Steve could usually be found in the comfort of his recliner while catching up on politics, or watching The Bachelor, The Voice, or Dancing with the Stars while enjoying many Klondike bars.

Donations in his name may be made to the DiStefano Memorial Fund, 21913 Sunset Ridge, Watertown, NY 13601 or to the American Heart Association, P. O. Box 3049, Syracuse, NY 13220. Online condolences to his family may be made at www.cummingsfuneral.com.