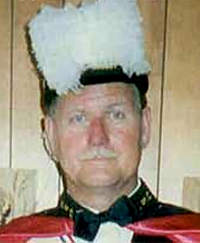 William H. Hermann, 83, passed away Wednesday, April 12, at his home in Calcium.

Calling hours will be held 2 to 5 p.m. Saturday, April 15, at Cummings Funeral Service, Inc., 214 Sterling St., Watertown. A prayer service will be at the funeral home 10:15 a.m. Monday, April 17, followed by the funeral mass celebrated at Our Lady of the Sacred Heart Church at 11 a.m. with Rev. Jonas Tandayu, MSC, pastor, presiding. Burial will be in St. Mary's Cemetery, Clayton.

Bill was born in Redwood on May 28, 1933, son of Adolf and Anna M. Schwartz Hermann. He was an honor student at Immaculate Heart Academy and graduated in 1950. After graduation he worked for two years at Zimmerman Accounting, Watertown.

On June 10, 1952. he entered the US Navy, serving four years actively and four years inactive reserves. His service included time in Il, OK, FL, and VA. He received the Good Conduct and National Defense Service Medals and was honorably discharged on June 9, 1960.

After his service to his country, Bill worked as a Head Teller at the Northside Branch of National Bank of NNY, then transferred to become a personal loan officer. In July 1964 he began his career for Stebbins Engineering. He was assistant purchasing agent. In December 1995 he retired as Purchasing Agent and Transportation Director.

He was a member of VR22, Naval Reunion Group in Norfolk, VA, the Star Grange in Calcium, and a life member of American Legion Post 61 in Watertown. Bill was an active fireman. He was past president and assistant chief of Calcium Fire Dept. He served as president, Truck Captain, and on the board of directors at North Pole Fire Dept. and was a member of its drill team, where he was referred to as Uncle Bill. He was a life member of NNY Firemen's Assoc., NYS Firemen's Assoc. and NNY Drill Teams Captains Assoc. He was a member of St. Lawrence Power and Equipment Museum, Madrid and the zoning board in the town of Pamelia.

Bill loved his John Deere tractors and camping. He enjoyed traveling with the Serra Club, Ogdensburg and once a year he traveled with the Knights of Columbus to the Isle of LaMont Shrine. His dream came true when he traveled a number of times to Germany to meet relatives and genealogy was a passion of his. He was also a member and past president of NNY Transportation Club and member of Purchasing Management Assoc. He very much enjoyed attending activities and sporting events of his grandchildren.

He was predeceased by a sister, Mary Jean, who died in infancy, five brothers-in-law, a niece and a nephew.

Online condolences may be made at www.cummingsfuneral.com.