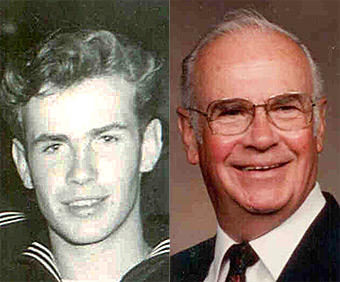 Calling hours will be held at Cummings Funeral Service, Inc., Watertown on Wednesday, March 29, from 4 - 7PM. A prayer service will be at the funeral home on Thursday, March 30, at 10:15AM followed by the funeral mass celebrated at Holy Family Church at 11AM with Rev. Steven Murray, pastor, presiding. Burial will be in Glenwood Cemetery.

Jack was born in Watertown on October 13, 1925, son of John F. and Margaret (Boyle) Killeen, Sr.. He was a 1946 graduate of Immaculate Heart Academy and had attended Canton ATC.

Jack entered the US Navy on January 9, 1943. He received the Asiatic Pacific, European African Middle Eastern, American Theatre, and Victory Ribbons. He was honorably discharged as a Quartermaster 3rd Class on February 10, 1946.

He married Alice Perrigo in 1946. The couple had three children, and after 44 years of marriage, she died in June of 1990. He married Mary T. Finley on July 13, 1991 at St. Andrew's Church, Sackets Harbor with Fr. Lian O'Dougherty officiating.

Jack had been a manager for Shine Theaters, which included the Avon, Olympic, and others, then worked for Kraft Foods Co. He then worked for Proctor & Gamble and was a salesman at Empsall's Department Store. While living in Sackets Harbor and Watertown, he worked as a salesman for Gerber Products, Syracuse and retired after 29 years with the company.

He was a communicant of Holy Family Church, a former Eucharistic Minister at St. Andrew's Church, Sackets Harbor, a member of Knights of Columbus Council 259 and Bishop Conroy General Assembly 4th Degree Knights of Columbus and its Color Corp. Jack was a member of American Legion Post 61 and VFW Post 1400, Watertown. He had served on the Hay Memorial Library Board and was a past scout master, both in Sackets Harbor. He was a poet and story teller, swimmer, and woodworker. He enjoyed reading stories on the Civil War and was "Resident of the Month" at Samaritan Keep Home in 2001. Jack and Mary enjoyed their winters in Florida until his stroke in July of 1999. Before his stroke, you would always hear him singing and whistling.

Donations in his name may be made to either Sisters of St. Joseph, 1425 Washington St. or Holy Family Church, 129 Winthrop St., both in Watertown, NY 13601. The family is very grateful to Samaritan Keep and especially the staff on the third floor for their loving care of Jack. Online condolences to his family may be made at www.cummingsfuneral.com.