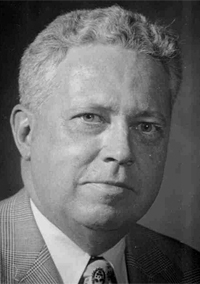 Edward J. Madden Jr., 90, formerly of 228 Barben Avenue, Watertown, New York, died on Saturday, March 11, 2017, at Samaritan Summit Village after a long struggle with dementia. He was born in Syracuse, New York on October 14, 1926, the only child of Delia Donovan Madden, a homemaker born in County Cork, Ireland, and Edward James Madden Sr., an engineer for the New York Central Railroad. Edward grew up in the Eastwood neighborhood of Syracuse and attended Blessed Sacrament School and Christian Brothers Academy (CBA). Among his odd jobs as a teenager were working in a brewery and serving as an usher at the Palace Theatre in Eastwood.

After graduating from CBA, in August 1944, he enrolled in the United States Navy and served in World War II as Fire Controlman, Third Class, on the U.S.S. Sedonia. He served in the Atlantic and Pacific theaters of operation. His ship brought troops and cargo to Marseille, France, then passed through the Panama Canal en route to the Phillippines. He served until June 1946, and was the recipient of Victory, American Theater, Asiatic Pacific, and Philippine Liberation Medals.

After military service, he attended Cornell University on the G.I. Bill and received a B.S. in Industrial and Labor Relations, the first in his family to earn a college degree. After graduation, he worked in sales, including selling Dr. West toothbrushes, then in the Industrial Relations department at E. Z. Washer Company in Syracuse. He worked there for three years. He received his J.D. from Syracuse University Law School in 1957. He privately practiced law until 1960 in Oswego and Homer, New York.

On June 25, 1960, he married the former Barbara Jean Barry of Solvay, New York. They were married for 41 years until her death in 2001. In 1961, they moved to Watertown where he took a position as trust officer for the National Bank of Northern New York. He worked at the bank for over two decades, rising to the position of Senior Vice President and serving as Secretary to the Board of Directors of the Executive Committee of the Board. In 1977, he earned a certificate from the Stonier School of Banking, Rutgers University, and wrote an award-winning thesis on banks and unions. He retired from the bank in 1981 and then practiced law of counsel with the Conboy office for the next seven years before retiring in 1988.

A devout Roman Catholic, he attended St. Patrick’s Church for over fifty years and was actively involved with many Catholic and charitable organizations, including serving as President of the Board of Directors of the Hospital Service Corporation of Jefferson County (1971-1981); as Chairman of the Continuing Legal Education Section, Jefferson County Bar Association; and Chairman of Bishop Stanislaus Brzana’s 10th Anniversary Campaign. He also served on the school board of Immaculate Heart Central

In retirement, he and his wife spent their winters in Myrtle Beach, South Carolina, where they had a wide circle of friends. They enjoyed several trips, including two extended trips to Ireland where he explored his family’s roots, two cross-country road trips, and tours of the Canadian Rockies, Germany, and Italy.

Calling hours will be held on Monday, March 13, at Cummings Funeral Service, Inc., 214 Sterling St., Watertown from 4 - 7PM. A prayer service will be at the funeral home on Tuesday, March 14, at 9:15AM followed by the funeral mass celebrated at 10AM at St. Patrick's Church with Fr. Pushpadason Santhanthony, Parochial Vicar, presiding. Entombment at St. Mary's Cemetery's Mausoleum, DeWitt will be at the family's convenience.

In lieu of flowers, contributions may be made in his memory to Immaculate Heart Central School, 1316 Ives St., Hospice of Jefferson County, 1398 Gotham St., or St. Patrick's Church, 123 S. Massey St., all in Watertown,, New York 13601. Online condolences to Edward's family may be made at www.cummingsfuneral.com. His family extends deep appreciation to the nurses and health care providers of Samaritan Summit Village, third floor south, for their excellent care and compassion in his final days.