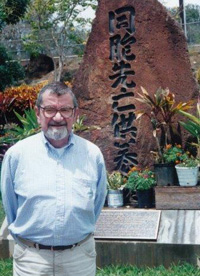 A memorial mass will be celebrated on Thursday, June 1, at 11AM at Holy Family Church, Watertown with Rev. Steven Murray, pastor, presiding. Burial will be at 10AM prior to the mass in Glenwood Cemetery. Arrangements are entrusted with Cummings Funeral Service, Inc., Watertown.

Jim was born in Watertown on July 28, 1931, son of Clarence R. and Justina Leone Cleland Brett. He was a 1949 graduate of Watertown High School and received his bachelor's degree in 1953 from Notre Dame University and also played in the college band. After college he entered the US Army, serving from 1953 - 1955. While in the Army, Jim served a year in Germany. A contributor to college and military publications while in college and the army, he was also assigned to duty for six months in an army public information office while in Germany.

At age sixteen, he became formally associated with the Watertown Daily Times when he was high school correspondent for the Times. While in college he worked summers as a copy boy and a reporter. He returned to the Times, after the Army, on August 15, 1955 as a reporter and staff writer, serving as the Canton correspondent from September 1955 to December 1956. He returned to Watertown and served fourteen years as police reporter and feature writer. In 1968 Jim authored a three part series on Frederick Exley and in 1970 he was chairman of the Times Editorial Association.

In 1971 he began his career with Oswego State University College in the English Department, where he was an associate professor and retired in 1996 as a Journalism professor. While at Oswego, he was an organizer and director of the student internship program at the New York Times in 1972 and in 1985, was a member of the organizing committee of State University of New York Colleges in the North Country on Ft. Drum. He was a member of both NYS Retired Teachers and Oswego Emeriti Associations.

Jim was a Master Gardener for Cornell Cooperative Extension, and was a member of both the Royal Horticultural and American Horticultural Societies and Master Gardeners American. He was also a member of Jefferson County Historical Society, Nature Conservancy, American Legion Post 61, Ives Hill Country Club and Black River Valley Club. He enjoyed reading, gardening, and traveling and after his retirement he visited Ireland, Rome, California, and Hawaii.