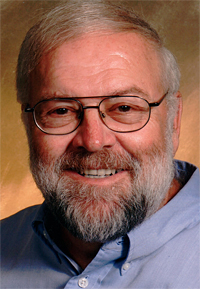 Calling hours will be held at Cummings Funeral Service, Inc., 320 John St., Clayton on Friday, February 3, from 4 - 7PM. The funeral mass will be celebrated at St. Mary's Church on Saturday, February 4, at 11AM with Rev. Arthur J. LaBaff, pastor, presiding. Burial in Holy Sepulchre Cemetery, Rochester will be at the family's convenience.

Ron was born in Rochester on June 28, 1945, son of Edmund A. and Dorothy K. (Klem) Mayer. He was a graduate of East Ridge High School, Rochester, and Rochester Institute of Technology where he received his degree in Mechanical Engineering. He then began a long career with Xerox Corp. in Rochester and retired after 35 years of service with the company. For over 30 years, he was a member of the Laurelton Volunteer Fire Dept. in Rochester.

After his retirement, Ron moved permanently to Clayton. He was a communicant and active member of St. Mary's Church, where he was an usher and money counter. He volunteered for T. I. E. R. S. (Thousand Islands Emergency Rescue Service) for over 15 years. Ron was a member and served on the Board of Directors of the US Coast Guard Auxiliary. He was a former member of the Clayton Lions Club, enjoyed volunteering at the Thousand Island Museum, and was also involved with the Annual Decoy Show in Clayton. Ron was a very caring person, loved to cook, especially for others, and enjoyed fishing and woodworking.

He is survived by his brother and his wife, Robert E. and Elaine A. Mayer, Hilton; a nephew (who is also his godson) and two nieces and their spouses, Michael R. and Kristen Mayer, Michelle M. and David Bonczek, and Melissa A. and Aaron Wight; several great nephews and nieces, an aunt, several cousins, and many, many dear friends.

In lieu of flowers, the family wishes donations in Ron's name to either TIERS, PO Box 524, Clayton, NY 13624 or School of the Holy Childhood, 100 Groton Pky., Rochester, NY 14623. Online condolences to his family may be made at www.cummingsfuneral.com.