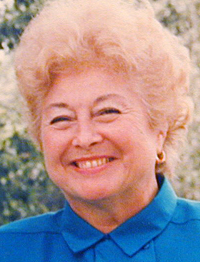 Philomena Morgia Canale, 90, passed peacefully on January 16, 2017 surrounded by her loving children. She was a strong woman who valiantly persevered through a long illness. Her most treasured moments were spent in the company of her children and grandchildren. She also enjoyed spending time traveling with life long friends. She had a warm sense of humor and a generous heart and an ability to entertain both large and small groups with style and grace.

She was a graduate of Watertown High school. She married Richard Peter Canale on June 2, 1946 at St. Anthony's Church with Msgr. Claude Sechi officiating.

Philomena's work history included Herrs Fashion Shop and assisting with the operation of Canale's Restaurant. She was a communicant of St. Anthony's Church.

Her early years of marriage were spent at 115 Breen Avenue and upon the birth of her twins, she resided at 136 Flower Ave. East in Watertown, NY. Canale's Restaurant, having been in business for 52 years, was sold and she and her husband Richard retired and spent winters at their home in Largo FL.

A funeral mass later this year at St. Anthony's Church, Watertown will be announced. Arrangements are entrusted with Cummings Funeral Service, Inc., Watertown.

Donations may be made to St. Anthony's Church 850 Arsenal St. or the Sisters of the Precious Blood, 400 Pratt St., both in Watertown, NY 13601. Online condolences to her family may be made at www.cummingsfuneral.com.