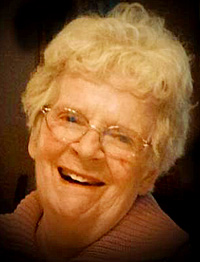 Calling hours will be held at Cummings Funeral Service, Inc., 214 Sterling St., Watertown on Thursday, December 20, from 5 - 8PM. The funeral mass will be celebrated at Our Lady of the Sacred Heart Church, Watertown on Friday, December 21, at 11AM with burial following in Dexter Cemetery.

Mrs. Emerson was born in Fort Covington on June 13, 1931, daughter of Antoine and Ida Bodway Castagnier. The family moved to Watertown and she graduated from Immaculate Heart Academy.

On August 4, 1957 she married Richard F. Emerson at Our Lady of the Sacred Heart Church with Rev. Benoit Dostie officiating.

She had been a clerk and an accountant for both the Agricultural Insurance Co. and Blue Cross/Blue Shield, both in Watertown. The couple moved to Rome in 1999 and she was a communicant of St. Peter's Catholic Church in Rome and a former communicant of Our Lady of the Sacred Heart Church in Watertown. Eloise was an avid reader, and she enjoyed golfing and traveling.

Besides her husband, Richard, she is survived by her son and his wife, Mark R. and Karen Emerson, Watertown; her three daughters, Jacqueline E. and Timi Gamble, Rome, Amy J. and Riley Blakley, Johnstown, and Sarah I. Eastup, Rome; nine grandchildren; her brother and his wife, John R. "Jack" and "Sally" Cascanette, Myrtle Beach, SC; and numerous nieces, nephews, and cousins. She was predeceased by her daughter, Lisa M. French, October 5, 2008, one grandchild, two brothers, Ernest Castagnier and Francis Castagnier, and four sisters, Eva M. Shannon, Agnes I. Jones, Ruby Mainville, and Albena Krupcale.