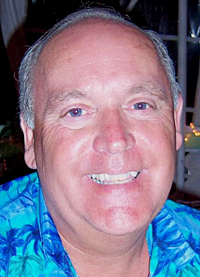 Patrick D. Phinney, 63, Cape Coral, FL and formerly of Clayton, NY, passed away on Saturday, December 24, 2016 with his family at his side.

He was born May 22, 1953, son of Francis Phinney and Marjorie Hickok. Pat was the youngest with three older brothers and three older sisters. He grew up in Clayton and was raised on the family vegetable farm. Pat attended and graduated from Clayton Central School in 1972. He then went to work for Gerald Hammond at the local gas station, buying the business in 1973. When the business out grew the space at the gas station, he went on to buying the local Chevrolet dealership from Bill Dominy.

Pat married Deborah Lasell in 2004 bringing him 3 step children, Andrea, Matthew, and Mark Morgia. Amongst the blended family Pat and Deb have 13 grandchildren.

Pat bought his first business in 1973 and had involvement in multiple businesses over the years: Phinney's Service Station, Phinney's Chevrolet (Phinney's Automotive Center), and The Victorian Convenience Center. He was respected in the community as a successful businessman for over 40 years. Pat volunteered in several community programs. He served as the President of the Clayton Chamber of Commerce. He also volunteered with The Lions Club, The Clayton Fire Department, Clayton Fire District as a Commissioner and Chairman, and The Phinney Charitable Foundation, which he founded with his sons in 2010.

Pat loved the outdoors in every fashion. He was an avid hunter and boater. He raised his kids in the woods and on the St. Lawrence River, and that tradition continues to carry on through his kids and grandkids. Pat and Deb loved boating, their trips to St. Maarten, and most recently their home in Florida. Wherever they traveled they seemed to meet "life long" friends.

Pat fought a courageous battle with cancer since July 2014. He will be forever grateful for having his wife Deb by his side as his favorite nurse. In his own words he has said, "I wouldn't have lasted this long without Deb taking care of me!"

Donations in Pat's name may be made to Moffitt Cancer Center Foundation, 12902 Magnolia Dr., MBC-FOUND, Tampa, FL 33612. Online condolences to his family may be made at www.cummingsfuneral.com.