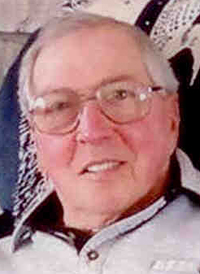 Calling hours will be held at Cummings Funeral Service, Inc., Watertown on Wednesday, December 12, 2012, from 4 -7PM. The prayer service will be at the funeral home on Thursday, December 13, at 10:15AM followed by the funeral mass celebrated at 11AM at St. Anthony's Church with Rev. Donald Robinson officiating. Burial will be in Glenwood Cemetery.

Mr. Coniglio was born in Watertown on February 23, 1925, son of Joseph and Josephine DiDomenico Coniglio. He graduated from Watertown High School in 1943.

On October 23, 1943 he entered the US Army and was stationed in Pearl Harbor for eighteen months during his service. He received the Asiatic-Pacific Campaign, Good Conduct, World War II Victory, and American Campaign Medals and was honorably discharged on March 31, 1946.

On September 13, 1952 he married Dolores A. DeCilles at St. Anthony's Church with Fr. George Tobin officiating. Mrs. Coniglio died June 9, 2008. He had been a custodian for the Watertown City School System, working at both Case Junior and Watertown High Schools. After 33 years of service, he retired as head custodian in 1985.

He was a communicant of St. Anthony's Church. Salvatore was a life member of the Northside Improvement League, Elks Lodge 496, VFW Post 1400, and American Legion Post 61. He enjoyed Sunday dinners with his family, dancing with his wife, and his cottage on Pillar Point. He also enjoyed gardening, his dogs and walking.

Mr. Coniglio is survived by his two sons, Joseph M. Coniglio and companion, Helen J. Reno, and Michael A. Coniglio, all of Watertown; his two daughters and their husbands, Mary Jo and Douglas W. Wood, and Cabrina A. and John M. Rotella, all of Watertown; five grandchildren, Shalaina (Rotella) and Ryan Thompson, Angela and Alyssa Rotella, and Storm and Sterling Wood, and two great grandchildren, Giuliana and Adriana Thompson; his sister, Anita C. LaFave, Naperville, IL; numerous nieces, nephews, and cousins and several godchildren. Besides his wife, Dolores, he was predeceased by his sister, Caroline Laughlin.