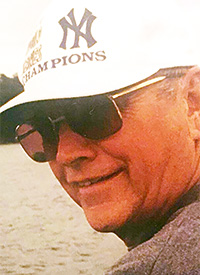 Calling hours will be held at Cummings Funeral Service, Inc., 320 John St., Clayton on Thursday, December 8, from 4 - 7PM. The funeral mass will be celebrated at St. Mary's Church, Clayton on Friday, December 9, at 11AM with Rev. Arthur J. LaBaff, pastor, presiding and burial will follow in St. Mary's Cemetery.

Sterling was born in Watertown on June 11, 1940, son of Clarence J. and Ethel B. Heintzelman LaLonde. He was a 1959 graduate of Clayton Central School. On May 8, 1965 he married Linda L. Dwyer at St. Mary's Church with Rev. Leo Wiley officiating.

He served in the Army National Guard, entering on July 12, 1963, was active for almost a year, and was honorably discharged from the Reserves on July 11, 1969. For 38 years he worked for the NYS Dept. of Transportation. After his retirement, he was associated with Cummings Funeral Service, Inc. and with Bonnie Castle Yacht Basin in Alexandria Bay.

Sterling was a communicant of St. Mary's Church and was a member of the Knights of Columbus Council 350. He was a 42 year member of the American Legion Colon Couch Post 821 and a 56 year member of the Clayton Fire Dept. He enjoyed playing in the Twilight Golf League and Clayton Old Timer Hockey. He was an avid sports fan, on all levels including high school, and his favorite teams were the Yankees, Giants, and Bruins. Sterling enjoyed golfing, camping, ice fishing, swimming, and he was known for providing refreshments at the Clayton Christmas Parade. He treasured spending time with his family, friends and grandchildren.

Along with his loving wife, Linda, he is survived by his three daughters and their husbands, Tammy L. and Joseph Gallion, Rock Hill, SC, Melissa A. and Stephen Dudyak, Chazy, and Stacey L. and Jeffrey Lalonde, Watertown; four grandchildren, McClain and Reagan Dudyak and McKenna and Owen Lalonde; sister-in-law, Dorothy L. "Dot" LaLonde, Clayton; and several nieces, nephews, and cousins. His two brothers, Donald J. and Bruce W., died before him.

In lieu of flowers, donations in Sterling's name may be made to either American Legion Christmas Fund, 518 Riverside Dr. or Clayton Volunteer Fire Dept., 855 Graves St., both in Clayton, NY 13624. Online condolences to his family may be made at www.cummingsfuneral.com.