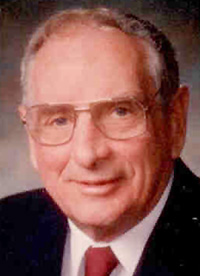 Calling hours will be held at Cummings Funeral Service, Inc., Watertown on Tuesday, November 22, from 4 - 8PM. The funeral mass will be celebrated at Our Lady of the Sacred Heart Church on Wednesday, November 23, at 11AM with Rev. Jonas Tandayu, pastor, presiding and burial will follow in Glenwood Cemetery.

Chuck was born in Watertown on October 13, 1926, son of Wilburt C. and Sarah O'Brien Elliott. He was a 1944 graduate of Watertown High School. He received his Bachelors of Civil Engineering from Clarkson College of Technology, and while there also played hockey and football.

On September 15, 1944 he entered the US Navy and served as an Aviation Electronic Technician. He was honorably discharged on July 7, 1946. He married Theresa Anne Edus on December 29, 1948 at Our Lady of the Sacred Heart Church with Rev. Albert R. Plante officiating.

Chuck began his career with the Thousand Island State Parks in 1953. He started as a Park Engineer and retired as the Regional Director in September 1991 after 38 years of service to NYS. After his retirement, he was a partner in Elliott & Tinsley, Civil Engineering and Land Surveyors. As a communicant of Our Lady of the Sacred Heart Church, Chuck participated in several of the church’s organizations such as Holy Name Society and Parish Council. Following the fire that destroyed Sacred Heart Church, Chuck organized and chaired the committees as the building engineer that guided the construction of the present day church. He was a Board member of Development Authority of the North County (DANC) from 1985 – 1995, and, was a life member of the Northside Improvement League. A winner of the National Silver Beaver Award, Chuck remained a lifelong member of the Boy Scouts of America. He served as past president of the Jefferson-Lewis Boy Scout Council as well as Commissioner of the Seaway Valley Council. He was involved with creating and planning the yearly International Boy Scout Camporee that is still held at Wellesley Island State Park today. Always a community minded volunteer, Chuck enjoyed gardening, swimming, and especially attending his grandchildren's sporting events and activities.

Donations in his name may be made to either Our Lady of the Sacred Heart Church, 320 W. Lynde St., Watertown, NY 13601 or the Minna Anthony Common Nature Center, 44927 Cross Island Rd., Fineview, NY 13640. Condolences to Chuck's family may be made at www.cummingsfuneral.com.